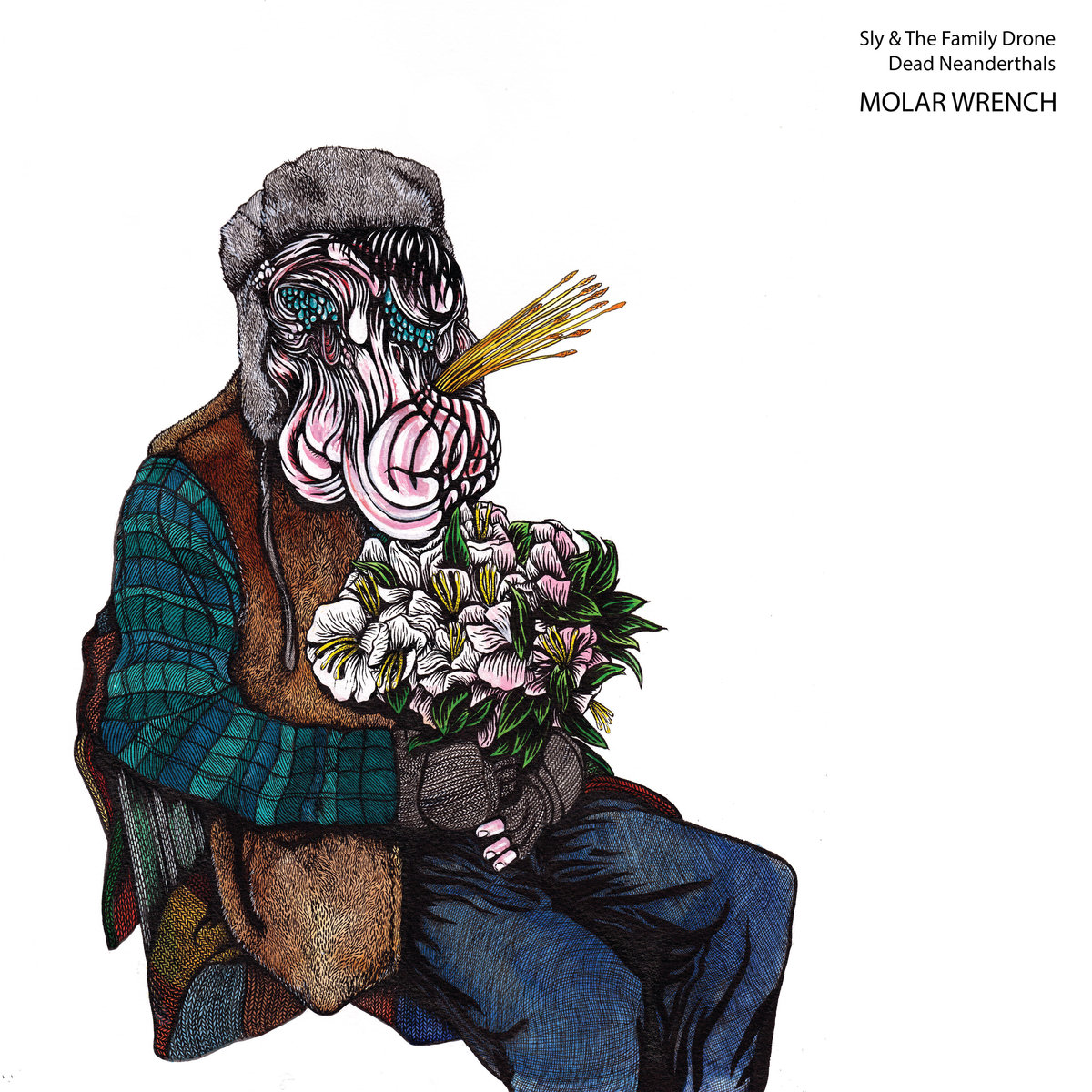 I’ve never seen Dead Neanderthals, but my mental image of them as gnarly road warriors blowing the minds of unwary listeners in the filthier venues of the world may have coloured my perception somewhat. Likewise Sly & The Family Drone have a reputation for wild unhinged performances leaving a trail of dazed punters in their wake, so the combination of the two is a match made in – well, definitely not Heaven… and I very much doubt that Satan would let this lot into Hell. So forged in some other dimension where few would care to tread without protective footwear.

If I was being lazy, or at least even lazier than usual, I’d say something like “Brötzmann’s Machine Gun meets early Krautrock” but that would be quite wrong of me and quite possibly result in threats of violence. Neither the Neanderthals nor The Family Drone are the kind of guys you’d want to mess with and there’s the strong possibility that our paths may cross one day and I’d like to keep hold of the few teeth I’ve got left…

But if you can imagine Brötzmann playing at some muddy late 60s festival outside Düsseldorf with some crazy ass freaks who’ve just robbed a music store then you might be somewhere in the same field as this lot.

It’s the oscillators, man, they’re freaking me out – not in a cosmic trippy hippy way, but a ‘fuck your shit up we’re the lost tribe of doom’ kind of way. And there’s the goddamm drums thundering into your skull, while the Great Beast Baritone sacrifices your sanity to some daemoniac deity and the wild eyed tenor screams in your face to stop talking and bloody well listen. What are you smiling at?

I don’t know which of the Family Drone is irresponsible for the electronic noises, but it sounds like Damien the Antichrist has hotwired his grandad’s old wireless and is licking his own bodily fluids off the glowing innards.

Meanwhile, the two drummers nail down the coffin lid of your nightmares – over and over until the earth falls on top of you and you lie there gasping for air as Muck Man (Part 2) starts to envelop you, building to a heart thumping roar..

Adolphe Sax had a number of near death experiences and this album could be one of them.

The last track, Molar Wrench starts with one of the few relatively mellow moments of the album – a slowly building grind with plaintive cracked long tones from the tenor while the drums clatter as they root around in the tool box and the nervous hum of the electronic medication starts to numb your jaw… it’s for your own good, they mutter grimly as they hold you down and try to get a good grip on the offending tooth. The drill whines and you can taste the iron of the rusty mole grips closing around your infected wisdom…

…and then you wake up sweating, fumbling for the light… Jeez, what was I drinking last night… there was this band and then I can’t remember what else…

and then you find the blood stained tooth clenched in your hand. Oh shit…

Molar Wrench is available on vinyl or as a download from Hominid Sounds, Sly & The Family Drone and Dead Neanderthals – take your pick, but pick one.