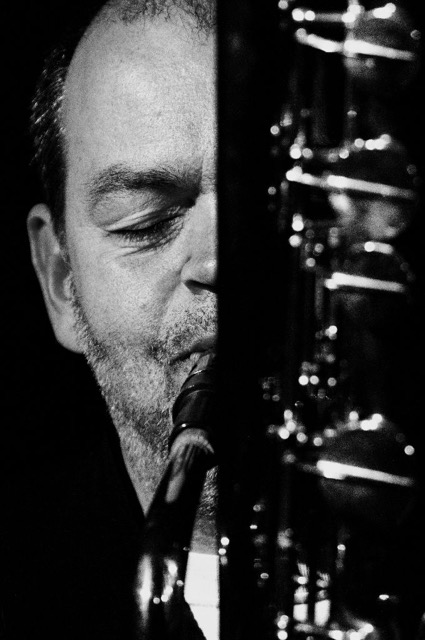 I’m arriving at the tentative conclusion that Dirk Raulf takes nothing seriously and everything seriously, at the same time. The bass saxophone quartet Deep Schrott is a good example: a serious exploration and love affair with the instruments possibilities filtered through unexpected cover tunes (Kylie Minogue? Black Sabbath?) combined with sonorously accessible original compositions. Or there’s the playfully serious avant garde improvisations of Sonargemeinschaft, putting Raulf’s saxophones next to Frank Schulte’s electronics. Or his solo performances. On the other hand, maybe it’s not about being serious or not, but rather a refusal to be pigeonholed…

1. What was your first musical instrument, and what did it mean to you?
It was a Bb clarinet. It is a little more intricate than that, though.

In my family, the tradition of singing songs together, sometimes accompanied by self-taught guitar or even a piano, was still alive during my childhood. When singing folk tunes or Christmas songs, for example, it was quite familiar to be able to not only sing the songs by heart, but also to do harmonies. So the voice was my first musical instrument. My first favourite record was the original film score of “West Side Story”, my grandparents owned the vinyl record. Due to the fact that my sister, my mother and my grandmother were named Maria, I was deeply convinced that the song “Maria” was a dedication to them.

I was 12 years old when I took up the Bb clarinet, and I had a teacher in his 70s who was very kind and very experienced both as a musical teacher and as a musician. In addition to our weekly lessons, he often spent extra time with us, getting two, three, or more clarinets together to study duets or trios. We also played quite a lot of small performances, presenting the work of the music school in public. And all the time, I also sang in the school choir, with at least weekly rehearsals and many performances, too. At 15 or 16, I quit playing clarinet, I was simply bored with practicing and had other interests, rock music and girls and such, playing clarinet then seemed to be not the hippest thing around.

A friend and piano player then asked me to play a piece together with him at our A levels celebration, which took place in the local theatre with an audience of some hundred students and parents and teachers. We rehearsed and played Dave Brubeck’s “Rotterdam Blues”. A strange choice from my point of view today. I had absolutely no idea what it meant to play a blues, and I remember playing chromatic notes up and down. But we did our best, and the audience, especially our fellow students, were absolutely enthusiastic about it.

The piano player also played in a local jazz band that was quite popular in the small town where we grew up, and they asked me to play sax with them. I bought my first tenor sax, and that was it for the clarinet. Later, I transferred some of my clarinet experiences to the soprano, I suppose. And I still play the bass clarinet, even if it is not my main instrument.

3. What’s the balance of preparation vs. improvisation for the average live set or recording? Every balance is possible due to the project and/or the piece. My most recent composition for the bass sax quartet DEEP SCHROTT is an 18-minute piece without any improvisation at all. My most recent songs for the duet d.o.o.r with singer/piano player Oona Kastner are partly written, partly improvised. Apart from that, I have played (and still do) entire concerts without a written note and entire concerts without any improvisation.

To get an idea of the world of improvisation, I recommend Derek Bailey’s book.

4. What or who do you turn to for inspiration when you need it?
Not God. (Despite the fact that my mother’s name was Maria, and my father’s Josef…)

Everything from quietness to machines, from making love to a walk in the forest, from a good meal to a good conversation, nearly every kind of music, but MOST OF ALL books, art, theatre, film – every kind of art and genre.

Friends and colleagues. My children.

5. Does humour belong in music? (With thanks/apologies to FZ for this question!)
Humour has to be kept out of every art by all means.
(Joke.)

6. Where do you stand on the streaming/downloading/file-sharing/musicians-not-getting-paid-for-their-music debate?
First of all: I have no problem with fans sharing, liking, following, even copying. Serious fans will buy the music and support their favourite musicians anyway.

The music industry (we are talking about major labels and the big distribution systems here), however, has no interest but one: profit. Every (and I mean: every) chance to NOT pay anybody for their work properly will be realized by the music industry. Obviously, this is not only true for the music industry, but for the world we live in now. Some fifty or hundred motherfuckers own half of the world, while every five seconds a child dies from starvation.

Of course, you can find a lot of nice and even musically interested people in the business. The question is, as always: Are you willing to be part of the machine (i.e. work for it) – or not? And if not, what can you do?

My consequence has been to found small, self-managed, non-profit organizations and labels with colleagues, to do my own booking, to promote my stuff all by myself, to try to find people who think and work in a similar way, to be part of independent musical networks, etc. A lot of work, a lot of nerve-wracking details, a lot of bullshit to deal with, but you have the control, and you do not have to ask anybody for anything in terms of artistic decisions and choices. Artistic freedom is the main thing.

The methods and techniques of exploiting artists have increased, and OF COURSE the musicians are not getting paid properly. And wherever you take a look, it’s getting worse. We are talking about musicians, not about popstars or posers or puppets on a string. The music industry is mostly run by business people with no artistic idea, no artistic concept, no competence, no fantasy, no taste, no interest (see above). Vampires. Nothing else. These people could easily work in any other business – cars, computers, banks, whatever. Their only urge is: minimal investment, maximum profit, no matter what. (Again: The same in all our society.)

7. If money and time were no object, what would your next project be?
Quit and do something entirely different.
An environmental project. Something political. NGO. Urban gardening. I don’t know.
Or maybe even better: nothing. No project at all.
Take care of my children. Write a diary for them. Tell them stories. Try to share the analogue world with them as long as possible. Watch them growing up.
Read as many books as possible.
Do some hiking and wild swimming. Pick mushrooms. Learn about nature.
Cook. Have guests. Be friendly.
Live with my lady. Sleep with my lady.
Get invisible.
Give the music industry the finger.
No more selling any music to anyone any more.

A few samples of Dirk’s playing available on CD…