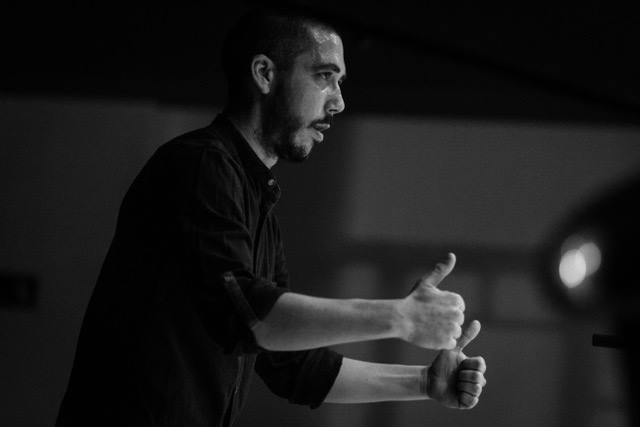 But even by MU standards, this one was special. Six percussionists in noise heaven. Just for once, none of those reed-merchants, string-pluckers or key-bashers, just pure kinetic rhythm-making. And in the perfect location. Yes, a little about the location… L’Automàtica is a print workshop, a creative collective, and occasional music/performance venue. It’s full of print machines, they seem decades old, the air is heavy with the smell of lubricating oil and solvent. And then we have six people hitting things to make a sound – it couldn’t be a more perfect marriage of performance and venue.

In a single, extended piece, González guides the spontaneous creation of a suite of creaks, groans, clatters, crashes, smashes, and any other onomatopoeic word you can think of. The conduction style is generous, the direction at times minimal, allowing plenty of room for creativity, especially in the many solos (and  if you think you don’t like ‘drum solos’ you’re wrong, you just weren’t there). Andorrà’s subtle rumble and scrape, coaxing sheet metal sounds from the cymbal. Prats’ thundering invention, as many times around the kit as you like and not one  cliché. And of course, the combined industrial strength of Roca, López, Prats and Trilla locked in together, hammering as a single clockwork mechanism; a refined power augmented by the ‘sound effects’ from Andorrà and especially Berbín’s ability to conjure almost-electronic sounds from his assorted objects – an added layer of finesse. Nor was finesse in any way lacking, these six masters proved capable (unsurprisingly) of a fine collective delicacy, creating fragile sound pictures to contrast with the sections of machine madness.

Really, it was absolutely exquisite noise.