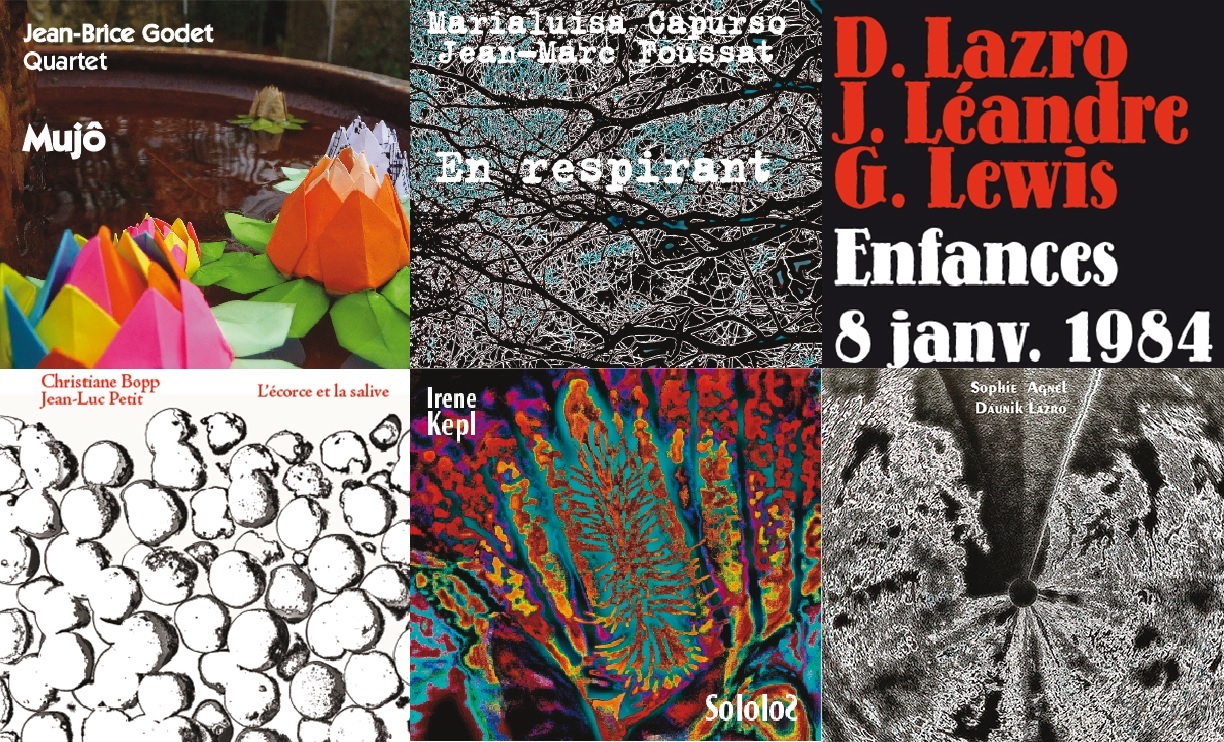 FOU Records is a French label dedicated to improvised music. I suspect the name derives from that of the label owner, Jean-Marc Foussat, but the logo indicates a fortuitous link to the I Ching hexagram 24, “Return” which offers such words of wisdom as “After a time of decay comes the turning point,” and “…the movement is natural, arising spontaneously,” and “…the old is discarded and the new is introduced.”* Not a bad philosophy for an improv label! FOU is focused on new free improvisation recordings, usually with a French connection, with a scattering of archival concerts from the 1980s. The variation in the catalogue is broad but the common theme is that each release absolutely demands close listening – a FOU disc couldn’t be wallpaper music if it tried.

Anyway, what follows is a series of short scribbles on six offerings from 2016.

*(I Ching quotations are from the classic Richard Wilhelm translation, rendered into English by Cary F. Baynes.) The title is a Japanese term for impermanency, implying everything is in transition. The liner notes quote Haruki Murakami’s first novel, “There is no such thing as the perfect phrase…” and in a sense this whole disc is Godet’s highly expressive quest for what cannot be found: permanence and perfection. But no matter, because it is the journey that is important and Godet and Attias takes us by the ear and march us down quasi-martial paths, lyrical avenues, ad zen cul-de-sacs. “En respirant” is well-named, with all three tracks having a rise and fall, a pulsing breath that carries both performers and listener to new and strange soundworlds. This is a live performance from early 2016. It opens with Foussat’s subtle space-age electronics and chanted/moaned vocals that begin in a ritual (almost monastic) vein but are soon picked apart by Capurso’s cries, grunts, yelps, etc. processed and perfectly positioned to produce a rather unsettling and atmospheric effect – I kind of imagine this as the soundtrack to an unnervingly slow scene by Tarkovsky.

Buried in here is a poetry reading (or intoning) in which each word seem dragged from Capurso’s soul, partial and transformed, creating a wonderfully hypnotic disorientation. It’s odd, maybe even oddball, but also haunting and engaging. This is one of FOU’s occasional ‘archive’ releases; in this case, a 1984 meeting recorded by Jean-Marc Foussat between the bass of Joëlle Léandre (relatively early in her career) and the horns of Daunik Lazro and George Lewis. With the exception of the two centre pieces (Enfances 5 & 6) these are short, sketch-like improvisations bursting with extended and non-traditional techniques.

“Enfance” is right – there is something very playful and unself-conscious at work here, both in the jocular asides between tracks and in the sonic interactions. At times, it’s practically goofy, but it’s also utterly riveting. And yet, despite the apparent extemporaneity, some un-expressed structure seems present, perhaps spontaneously arising from the dialogue.

The two longer pieces offer more variation and development, resolving into what amounts to a series of relentless movements, exploring different sound combinations. The playfulness is still there (Mr Punch voices, dog barks, etc.) but it’s joined with a natural fluidity of expression that results in a coherent and instant composition. No bass, no drums, no strings – all the sound in this selection is breath-derived, and while that may not be unique, it’s certainly unusual. What this encourages is a strongly minimalist approach from the off – the introduction to Une image dans les voix is a rumble of Bopp’s trombone complemented by Petit’s clarinet wavering on a nearby horizon… or the high-pitched sculptural chippings of Au pays des plis against a backdrop of whirrs and flutters… or the dinosaurs and angels of L’ombre du gel (often the sounds produced and utilised seem alien to the orgiinating instrument!)

Space is what it’s all about here – plenty of it, no desire to fill it, just subtle embellishments and accentuations. The result is an organic exploration, like listening to a subdued conversation between two introverted thinkers. Here Is the Thing
Lucid
Move Across
Candid
AmiNIMAL
Drop In
Drop Out
Apogee
SingSangSung
forget-me-not
Walzer On The Roof
Bacino
(58:38)

The only liner notes are a quotation from Trisha Brown, “Dancing on the edge is the only place to be.” Rather gnomic but appropriate because the “edge” is where Kepl repeatedly takes her instrument over the course of this disc.

And there’s no easing the listener in. And there’s no easing the listener in. The opening of Here Is the Thing is an uneasy sawing of the strings. There’s no zoning out allowed. This is not wallpaper music. The subtly uneven tempo and sparse pizzicato fingerings prevent any complacency, as a singular (and satisfying tension) results from this repetition without repetition. As the disc progresses, other moods arise, such as the slower, steadier exploration of Lucid, testing the exits from a once-familiar pathway; the rubber band of forget-me-not, the pointillistic Drop In, and the overwhelming zest of AmiNIMAL.

Extended and other sound creation techniques are present. As Kepl herself says, she is, “scratching, whistling and singing,” and these simply broaden the menu – more exotic flavours of a piece with the apparent concept: here I stand, this is who I am. 50+ minutes of pure sonic brio, free of the anchor or inspiration of collaborators – a purely personal expression. No liner notes or press release with this one, but trivia buffs might like to know that Daunik Lazro was loaned a baritone sax for this gig by one Anton Ponomarev (recent answerer of aJN’s 7 Questions). Anyway, to the music…

Clarity of expression does not require clarity of tone. This duo improvisation begins with some simple prepared piano, muted or otherwise prevented from ringing cleanly, giving Agnel’s introduction a kind of fuzzed tone that matches well Lazro’s barely vibrating saxophone reed. The dialogue quickly evolves into a negotiated structure, as the piano begins to sound like an overwound clock, and the horn’s deliberately burred tone is further submerged.

The 10-minute opener, Avec Ki is barely a taster for the variety of textures and depth of interplay to come and the sounds on offer include wasps in a jar, piledriver bass notes, spring rain delicacy, OM-lite drones, and koto-ish arrhythmia. But there’s no novelty value, nor oddness for oddness’ sake – the clarity and balance of the conversation is extraordinary. Though each may often step forward, the barest answer or supporting grace from the partner comes through purely and without strain. From intimate exchange to fragile dissonance, this is pure acoustic, idiom-less, unrestrained, free improvisation.