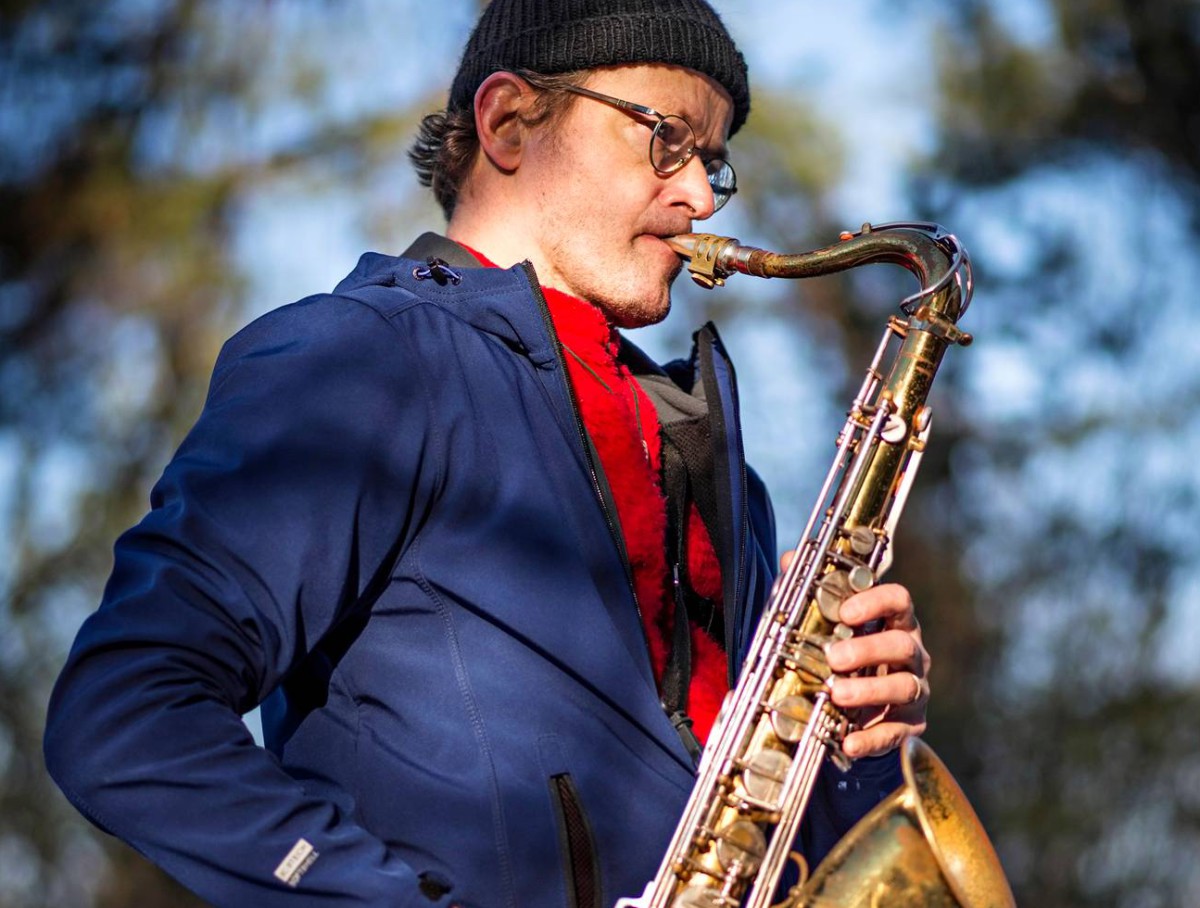 Jorma Tapio has been a significant pillar of the Finnish rock and jazz scenes for some time now, and is still renowned for his contributions to Edward Vesala’s Sound & Fury (in the past, he’s been referred to as the Sancho Panza to Vesala’s Don Quixote!) Indeed, Jorma is the driving force behind Sound & Fury’s re-ignition in recent years, resulting in the 2013 album “Pulsacion” (Ektro Records). Recent projects include the Tapio & Tuomi Duo (with drummer Janne Tuomi), Jorma Tapio & Kaski (with Ville Rauhala and Simo Laihonen), and an updating of the Karelian folk tradition in Lekkujad (Tuomi again, plus Pekka Nylund and Kristiina Olanto).

1)  What was your first musical instrument, and what did it mean to you?
My first musical instrument was the piano, then then violin and back to piano. Music has strongly affected me emotionally since early childhood. I realised it as an invisible, beautiful, strange language which could move people very much – kind of a different language.

2) What was the first music you ever bought, and the most recent?
Don’t remember that well but it was maybe some Top of the Pops cheap album with Martha & the Vandellas and stuff. My brother bought B.B. King “Alive &Well”, which is still impressive. My mother listened a lot classical European music. I remember David Oistrakh’s Tchaikovsky Violin Concerto which made a great impression on me, and of course there was Sibelius. The most recent is Prokofiev’s cello concerto by Steven Isserlis, a great player with a great sound.

3) What’s the balance of preparation vs. improvisation for the average live set or recording?
We do rehearse every time before a gig. Normally we play a mixed set with compositions and totally free playing. Sometimes going on without break from tune to another if we feel so. Some compositions are strictly arranged beforehand, always having the freedom to interpret it in some new way. Sometimes we kind of decide in what kind of “scenery” we are going to play, for example by choosing beforehand the instrumentation and pulse maybe.

4) Who is the most inspiring person you’ve collaborated with, and why?
In this life there have been many. One of the most impressive and important was certainly an Estonian healer/seer-woman who helped me to recover and find a new way from my heavy, very long crisis which was leading me towards destruction. I believe it was meant to be so. I didn´t meet her by accident.

After you have tried and tried your utmost with all your powers – then you get help, but you must believe in the Light.

Musically many also. To my mind comes Bobby Bradford and Conny Bauer who are both very humble, non-egotistic musicians – then drummers: Edward Vesala, Terje Isungset, Janne Tuomi and Simo Laihonen.

5) Your work is varied and doesn’t necessarily fit neatly into specific genre categories. How would you describe your music, and why?
Well, my music is somehow always melodic although I play atonal also, but you can play melodic in that too. Sound is the most important thing for me. If you hear music for two seconds, you hear some sound only. Does it affect you or not? I am not into neurotic sounds so much, there’s plenty of that already everywhere.  🙂

I like sounds which are rooted in the ground and which can fly by themselves.

I try to play from inside. I like also to listen other music – kind of inside – as I am playing or as it comes from myself.

In Finland, Nature is very strong and always nearby, there are not so many people. I guess that affects our music, so that we tend to have a slower pulse underneath than the southern Europeans. Also we tend to improvise kind of compositionally, make one whole picture and then move to another – not moving from place to place quickly all the time.

Primitive music and folk music, before the world music fashion, has had an effect on my music too. I believe in simple strong statements or just sound. My goal is to spiritualize my music. To give it that dimension. It is giving and trying to give even more – from your heart.

6) Where do you stand on the streaming/downloading/file-sharing/musicians-not-getting-paid-for-their-music debate?
Well, I’m not in the top 10 definitely.  🙂 I work hard but I am not a good seller so far. Those ever-smiling photos, selfies, selling yourself all the time, I am not home with all that. But I try my best in the circus.

The respect for art, and for the artists as the messengers from the invisible world, the truth-tellers, has gone down severely in the Western World (at least) in the past two decades or so. Entertainment, show business, fast food, etc. has taken its place.

People are not ready to pay musicians anything in  many places. We know this shit. We, artists, have to be very strong and defend our rights in this culture. To keep that creative light shining, which is driven not by outside stimulus for fame but from inside, you must have something to say and love your art form. It is a battle going on and it’s good also to go to the countryside and Nature, and have a rest from all that in between.  🙂

7) If money and time were no object, what would your next project be?
I don’t fantasize, just do it  the way you can.

Our next project is very interesting. Jimi Sumen, the guitarist from Sound & Fury etc., me and drummer/percussionists Janne Tuomi and Simo Laihonen is the group. Jimi and Edward Vesala (1945-99) visited junkyards, collecting lots of different-sized metal object with some peculiar sounds. Jimi even built some huge stringed metal instruments from them. Janne and Simo will play those. Inspiring sound world really! We hope to record next spring. The place is a big hall and it’s so cold there that we have to wait until the sun comes up a little bit and warms the place.  🙂

Check out some of Jorma’s recent work on these recordings: One thought on “7 Questions for… Jorma Tapio”