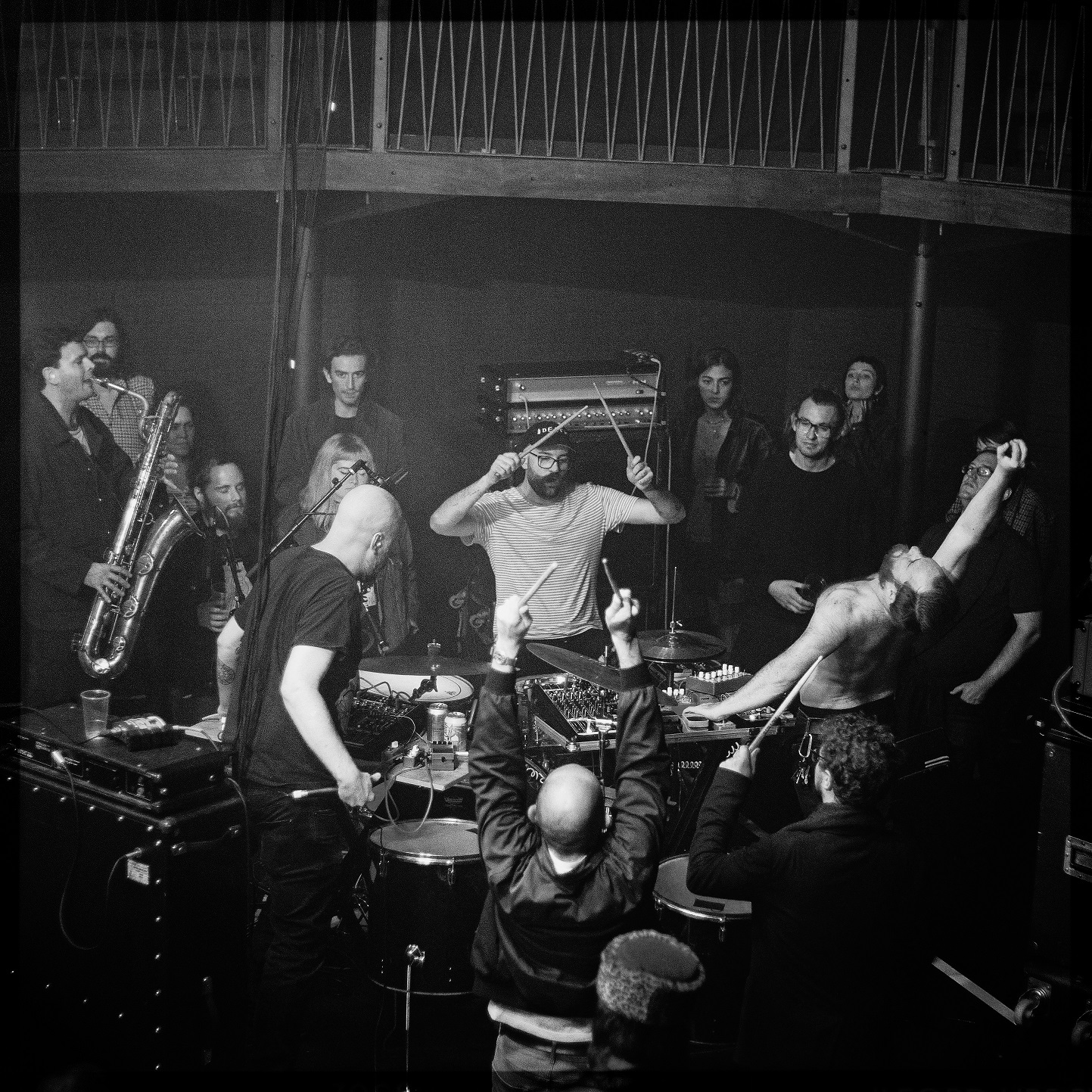 Having deleted various bits of uninspired introductory text (“legendary live performances…, blah, blah…”), I’m going to go with Sly & the Family Drøne being one of those ‘needs no introduction’ outfits. So, just play the track and read on to find out what Matt Cargill has to say…

1. Name an experience that contributed to your becoming a musician?
I had been in a band previously to sly, when I was around 17 that were sort of a scrappy, noisy post punk. We were called melitzer and named after a hardware shop in Camberley. I was the ‘singer’ and occasionally played guitar on a couple of numbers. I’d never had any formal lessons or anything and still not very good at either. After melitzer came to an end, I wasn’t really involved in any musical projects but had a zine and was putting on gigs under the name Half A Pigeon. It was around this time I started getting into weirder/noisier bands and putting on stuff more regularly and immersing myself in that. Eventually I moved to London to study sound art which really opened me up to a whole world of new abstract music and practices that I had no idea about. During my sound course I began to collect discarded cassette tapes and respooled them to make these abstract fragments of mangled, magnetic collages and exploiting the physical material. I started performing live with that material in around 2007.

Over the years sly has mutated many times but it started as a solo project. After a few solo outings, I was booked to play a festival near Winchester called Woolfire. I think this was the first time I’d paired the tape noise/rhythms with live acoustic drums and it felt good, so that’s been the basis for sly ever since. In terms of actively performing, going on tour with my good friends Shield Your Eyes in Europe for the first time was the main inspiration for wanting to make sly a serious live act. Getting to meet people and visit places you may never otherwise have the opportunity to, whilst engaging in live music is still a huge inspiration for me and one of the most exciting endeavours we can experience.

2. What was the first music you ever bought, and the most recent?
The first CD I remember getting was from a jumble sale at my junior school. It was The Spaghetti Incident? by Guns N Roses, along with a secondhand GnR bandana, which I still have. It wasn’t until many years later that I realised Raw Power was actually by The Stooges. My other early musical purchases would have been Bonkers 3, with Hixxy, Sharky & Dougal in a triple tape pack and Now That’s What I Call Music compilations. I started getting into vinyl after I fixed my Nanna’s old hmv turntable that had sat unused in her drinks cabinet for years. Once I fixed it, I started collecting my own records to put alongside all her Abba and Jim Reeves vinyl.
I’ve just got a new stylus for my turntable so catching up on a backlog of vinyl from the last couple of months. As I write this I’m listening to ‘Venexia’ by Mika Vainio, Kevin Drumm, Axel Dörner & Lucio Capece.

3. What have been the best and worst moments playing live so far?
We’ve been fortunate enough to get to travel and play some wonderful festivals. The first Supernormal we played in 2012 was very special and marked a bit of a turning point for the band. Going to LUFF in Switzerland was incredible, a really excellent festival with a very diverse program – we got to play with Headwar and Sissy Spacek and met Maria Chavez for the first time. I ended up coming home in a wheelchair. First time we played Supersonic and blew both Wolf Eyes and Swans off stage was a personal highlight. Milhoes de Festa in 2017 was also excellent, getting to play by a body of water is always appreciated, even more so if I get to crowd surf in an inflatable coffin.

Generally, we’ve avoided any nightmare scenarios with gigs. We’re self-sufficient with gear and started bringing our own PA system/speaker cabs to avoid issues with sound men –  and it always is men. I feel that the music needs to be loud and should have a physicality to it, so a system with powerful subs is essential. The worst shows we’ve had are ones whereby the rider has not been read and it comes as a total surprise as to what our gigs actually involve. This happens with shocking regularity. If we played just through the house PA then you’re at the mercy of the FOH tech, it removes all power from the band. So we prefer to bring our own and have sub reinforcement from the house. Sound technicians get a bad reputation but some of them act like absolute clowns with regard to tact and diplomacy. We played in Bristol recently and the tech took it as some sort of personal affront that we play in the way we do. It almost came to blows until I told him to go and have a break. He was later filmed watching videos of people on water slides during our set. Other bad experiences would include any time we’ve had the misfortune to be booked in Guildford.

4. Who are the most inspiring people you’ve collaborated with so far, and why?
Collaboration has always been at the core of sly, from the large rotating cast of band members, to live performances and records. The record we made with Dead Neanderthals ‘Molar Wrench’ was really fruitful and is being repressed currently. They’re a really inspiring band in the way that they constantly evolve and their records all sound different. I’m really looking forward to playing together again at Roadburn in April and some others later in the year.

In summer 2019, we collaborated with Sharon Gal, who is an incredible vocal improviser. I’ve loved her work for a long time and it was very special to perform our new feral, swampy music together at Supersonic in Digbeth.
We also collaborated with people from The Gate, which is a creative centre in West London for adults with learning disabilities. Their band JAMAICA!! Played at our LP launch in May and we collaborated as a big band with Alan Courtis at the ICA in February. You can read more about The Gate and the collab here: https://yarrow.org.uk/jamaica-performs-ica/.

5. Does humour belong in music? (With thanks/apologies to FZ for  this question!)
I think you have to be able to have a sense of humour, particularly in noise music. Of course it can be absurd and that also has place, but the concept of incredibly serious dudes clad in black staring blankly at their screens/tables full of junk is laughable. I was watching Skatgobs (Phil Minton, Luke Poot & Dylan Nyoukis) recently but the bill was sort of a diverse cabaret and people were reacting like it was a comedy set, which I absolutely don’t think it is, I just think people were confused and uncomfortable and their default reaction was to laugh. Which is totally fine of course. With regard to sly specifically, people often reference the name, which is clearly a joke itself. I often use puns and silly references, which may be a way of being self-deprecating or undermining myself but I am absolutely serious in my application and performance of the music.

6. Where do you stand on the streaming/downloading/file-sharing/musicians-not-getting-paid-for-their-music debates?
Platforms like spotify generally tend not to host a lot of the music I seek out. It may be fine for casual listeners or making playlists etc but I think that’s all its good for. If someone happens to find our music through spotify then that’s fine, but I would also hope they’d come to it and then want to buy the record. Buying a physical copy of a record, or some merch is one of the most direct ways you can support a band. For me, Bandcamp seems to have the best balance for supporting artists, hosting an excellent website with interesting features focussing on a lot of incredible music. That said, I would always prefer our vinyl to be stocked in an actual record shop. If anyone reads this and yr local record shop doesn’t have our vinyl, hassle them to stock it!

7. If money and time were no object, what would your next project be?
Funding for the arts is constantly being cut back, so if money was available, the ideal situation would be to be able to afford to travel and forge new relationships with more people from varied musical backgrounds. I’d like to be able to afford to book more touring bands and continue a fruitful cultural exchange.