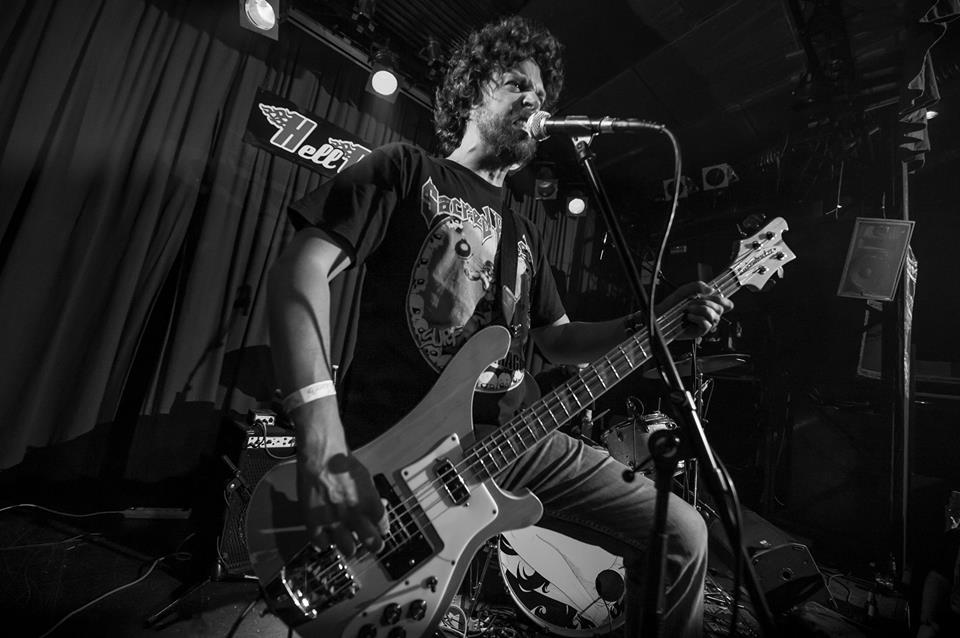 From free metal doom to sweet acoustic songs, Marco Serrato’s bass is versatile and restless. I first heard his playing on one of my favourite releases of the year so far, Raw Tonk’s “Spain is the Place”. That led me to Orthodox (his duo with drummer Borja Díaz) and Sputnik Trio (Orthodox plus Ricardo Tejero on sax) and Hidden Forces Trio (Serrato and Díaz once again, plus Gustavo Domínguez on reeds) – a journey of exploration and evolution.

1. What was your first musical instrument, and what did it mean to you?
There was a spanish guitar at home and some little Casio keyboard, but I couldn´t make anything with them. When I was 12 or 13 years old I wanted to be a drummer so my parents bought me a small Yamaha electric rhythm machine because I was a good student, but it was more like a toy and I couldn´t make anything with it. So when I got to be about 14, I was a good student still, they bought me an electric bass and finally I could do a lot with that! It wasn’t a good idea though, because I stopped being a good student forever.

2. What was the first music you ever bought, and the most recent?
The first thing I bought with my money was Helloween’s “Keeper of the Seven Keys Part II” on cassette. They were very popular in Europe when I turned onto metal at the end of the 80s.

The most recent was Dio’s “Sacred Heart”, who was alos very popular when I was into metal at the end of the 80s, hahaha! I never had the cd and saw it a very nice price!

3. What’s the balance of preparation vs. improvisation for the average live set or recording?
It depends a lot. In Orthodox, for example, we play written stuff. We have some spaces for some improvisation but everything is closed so we have to rehearse enough to get everything right. Then we have the free improvisation projects, for those it’s good to play alone a lot and work your sound and everything you can do with your instrument. If you can´t make it alone, you won´t be able to make it on stage with other people, Agustí Fernández taught me that. In the middle we have Hidden Forces Trio, where we play written parts and totally improvised parts. So there’s always preparation, because even if you’re going to improvise you must practice your instrument a lot and your relationship with others.

4. Name one person with whom you feel you have a telepathic playing relationship, and why.
Borja Díaz, we’ve played together for 12 years in many different projects and situations and know each other really well.

5. What (if any) superstitions or rituals do you have? (around performance, recording, everyday life?)
Nothing, sorry.

6. Where do you stand on the streaming/downloading/file-sharing/musicians-not-getting-paid-for-their-music debate?
Just in the middle of nowhere… at some point I miss the days where you had to work hard to get some stuff, and when you finally got it, it was something sacred you listened to time and time again. This was the music that fed you, all those albums you listened to thousand of times. Now you just say “ok, nice… next one!” and it’s a shame. Everything gets old too fast. On the other hand, record companies don´t waste their money on new musicians any more, taking no risks at all. The underground dissapeared, it’s missing among the internet waves. So we have just a few big names, a big cloud of names without faces and nothing in the middle. In the old days there were more big names, a more healthy underground and a lot in the middle. But, as Julian Cope said, “NOW is the fucking moment,” so stop complaining!

7. If money and time were no object, what would your next project be?
The same stuff I’ve been doing all these years, but with better instruments, better gear, more time in the studio and more professional technicians around at every gig.

Check out Marco’s bass playing on the following recordings: One thought on “7 Questions for… Marco Serrato”