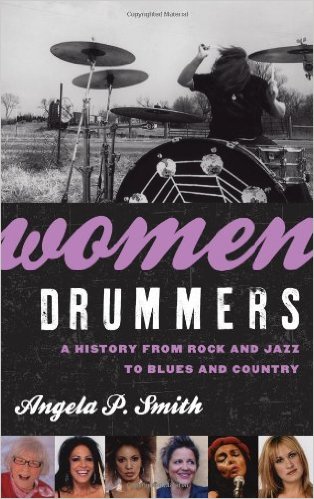 It’s true, women in music are still under-represented and often under-rated. And it’s possible to argue that it’s especially the case with the drums. There’s an unspoken (actually, often quite outspoken) perception that it’s a physical, brute force thing which is somehow ‘unladylike’. Angela Smith is a writer, journalist and musician and from that inside perspective, provides an insightful history of female percussion.

Structure-wise, the first set of chapters gives a chronological history of women drumming; and then there’s a series of genre-specific chapters covering country, blues, jazz, and ‘beyond’ (rock music doesn’t get its own chapter, presumably it’s so well-served in the last 30-40 years of the chronology).

To get the one gripe out of the way, it’s the early history stuff that over-reaches itself a little. There’s an attempt to portray women as the primary (pre-)historical drummer but there’s just a little too much supposition and assumption behind phrases such as, “probably…” and “no doubt…”. It’s a shame because by stretching the hyperbole, the author is actually in danger of undermining the valid contribution and growing place that women drummers have fought so hard for. But, I nit-pick. Where Smith strikes a very nicely-judged balance is in discussing the obvious discrimination faced by women drummers. It’s an unavoidable issue (and indeed, shouldn’t be avoided) and forms a backdrop to most of the book. But the emphasis is on the skills, achievements and positive stories of the various featured musicians, and in that sense, rises above the petty commentary of the male-dominated world of the 20th (and arguably, still the 21st) century, while never letting the reader forget that these musicians have overcome hurdles other than the simply musical.

To focus on the jazz-related material, there’s no shortage. Starting with the iffy context of pre-Jazz Age minstrel shows; on through the ‘Roaring 20s’ and the emergence of all-female jazz orchestras (despite excellent musicianship, lauded mainly for their visual appeal); to the swinging 30s when still the only real chance of work was to be part of an ‘all-girl’ outfit; then to the opportunities of wartime which brought wider acceptance of the girls (albeit still only as temporary, patriotic replacements for the guys). The central name around whom the narrative revolves is Viola Smith, often billed as the “female Gene Krupa” and presented here as a boundary-breaker and living legend (still going strong at the age of 102 thanks to, “exercising, taking her vitamins, and drinking one large glass of red wine a day.”) Those before her had toiled in all-women line ups and were viewed by the majority as novelties. It was Smith who wrote a clarion call editorial in Down Beat, stating that “hep girls could sit in on any jam session and hold their own.” She was also among the first to receive compliments on her drumming rather than her looks. That said, she still spent much of her long career playing in all-female bands or as a solo act.

After the war years, the chronology follows popular music into rock´n´roll, punk, and so on… but the jazz genre chapter brings us up to date, covering such well-known (and respected) names as Cindy Blackman Santana, Terri Lynne Carrington, Marilyn Mazur, Susie Ibarra, and Ikue Mori.

“Women Drummers” is both a fascinating read and handy reference – the listing structure means you can dip in, read a single self-contained entry and then put it back on your coffee table as an inevitable conversation-starter – and taken as a whole, it’s an intriguing story that is both gripping and informative; especially in terms of jazz history.