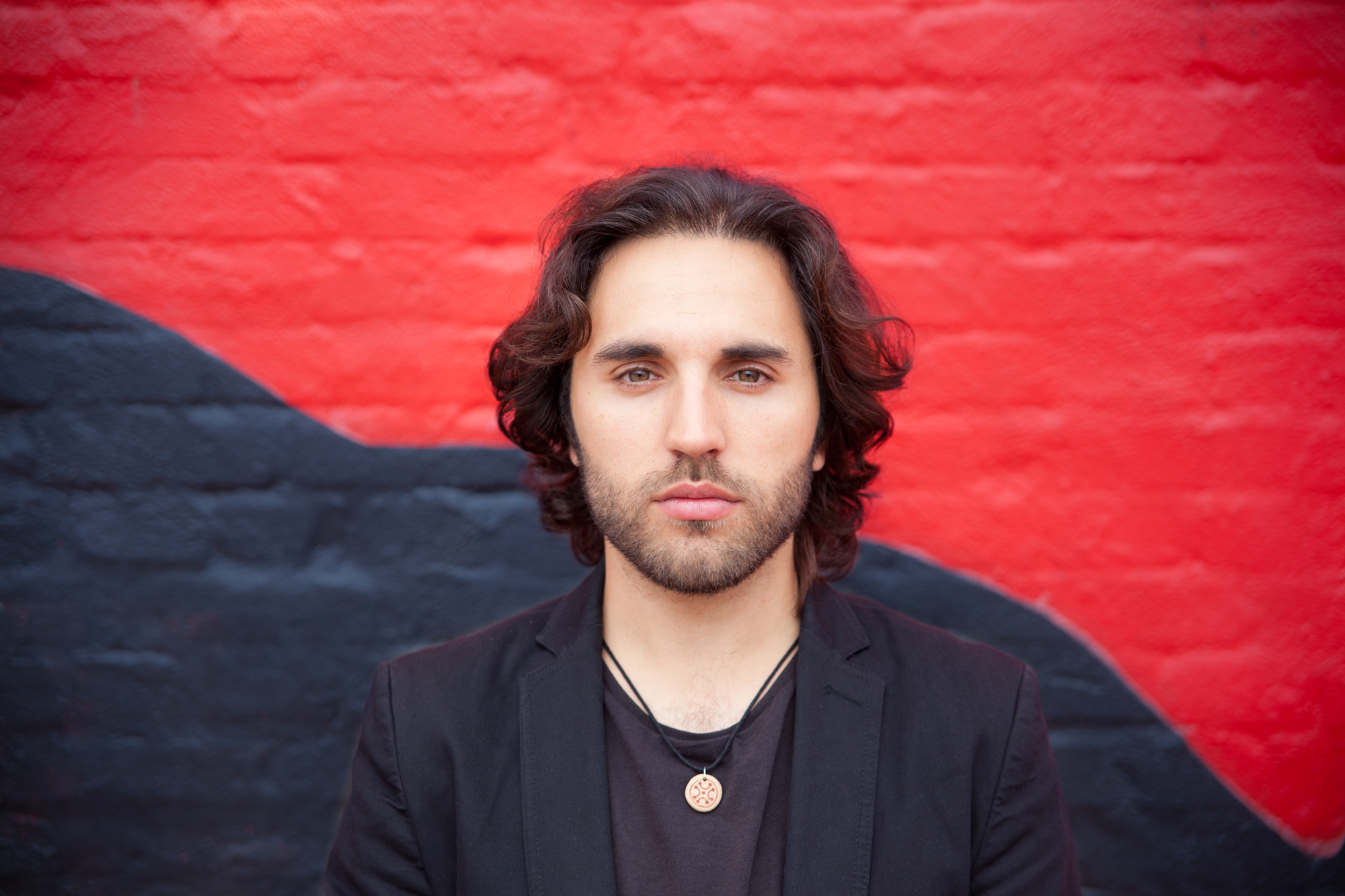 Pianist, composer and producer, Hugo Selles is classically trained (and inclined) but with a penchant for song-based forms with an eclectic mix of ingredients, including pop, prog, jazz, ambient, and electronica which he releases under the monicker of Psychic Equalizer. The first album was 2014’s “Train Back Home” which (happily) came my way via Jazz Journal and is essentially a personal suite on the topic of modern urban life. The follow-up is “The Lonely Traveller” (released 20th January 2017) with similarly thoughtful themes of people and global diversity and, to my ears at least, has more than a touch of the Pink Floyd about it.

1. What was your first musical instrument, and what did it mean to you?
I can’t actually remember which one was the first. I can imagine that as many kids, I got given some sort of percussion or something similar when very little. But the first one that I did recognize as the instrument I spent a lot of hours with was an upright piano. Someone in the family gave it to us as a present, and despite the fact that it was only me playing it after the years went on, it took me some time to become conscious of what an amazing gift it was.

2. What was the first music you ever bought, and the most recent?
That is another tricky question. I don’t really remember whether I bought it or if it was given to me, but I remember myself listening to a CD by Horowitz playing some Mozart Sonatas at a very early age. But my favourite one for many years was the recording of Bartók’s Piano Concertos by Géza Anda – simply mind-blowing! It wasn’t until I was a teenager that I started to listen to other types of music than classical and became a fan of Pink Floyd, Supertramp, Alan Parsons, Pat Metheny, Jan Garbarek and Brad Mehldau, among many others. On the other side, I do recall buying Highlanders’ Celtic Colours recently. It’s a Celtic music project by a friend of mine from Cantabria which I strongly recommend and that I decided to review for my blog Comentario Musical. I also purchased Rodriguez’s Coming To Reality a few months ago. I saw the fantastic documentary film Sugar Man about his life the exact same day he was performing in Copenhagen – I felt quite miserable when I realized! It is a really good album with beautiful tunes and lyrics and great 1970s arrangements.

3. What’s the starting point for a composition?
The truth is that I don’t have any sort of method on how to start a piece. However, when it is about film music the process is way clearer, as the expression in the image serves as a very powerful guide.

Otherwise, I usually find myself improvising with some concrete element until I hear something good enough to be written down as a draft. It is also true that for my project Psychic Equalizer I use that kind of cinematic approach to the music: a very narrative construction, with the same melodies, harmonies, rhythms and sounds that can be heard throughout a whole album.

4. What are your non-musical influences?
I think my homeland is the greatest source for inspiration. I have been living outside of Cantabria for more than 10 years, in other parts of Spain and in Denmark for the last few, and I always experience some sort of melancholy wherever I go. I spent the first 16 years of my life surrounded by nothing else than mountains, forests, birds and cows. Maybe I wasn’t the most social teenager as I used to spend most of my time in front of the piano, walking through the fields with my dog or cycling till the top of a pick. I have obviously learnt by now to appreciate the pleasure of a nice conversation or sharing good moments in good company. But at the end, there is something only the trees, the snow, the silence can give me. I try to reflect that in all of my music, no matter whether it is Psychic Equalizer, film music, solo piano works or any other composition or project. There is a magical majesty in nature that makes you feel rather insignificant but grateful at the same time. I also think other forms of art are a remarkable influence, painting makes a special impact on me. As the years pass by, I guess it is also noticeable how my worries or ideals are being reflected in music, such as the vision of how unfair the society we live in is or the dream or hope for a better world.

5. What (if any) superstitions or rituals do you have? (around performance, recording,
everyday life?)

I would like to consider myself as a rational thinker who prefers to learn from the mistakes in order to evolve, instead of blaming celestial gambling, bad luck horoscopes or whatever else… I do of course respect those who prefer to think their achievements are thanks to some sort of superior being and I do also find it quite interesting to listen to their points of view. It is absolutely essential to learn from other perspectives – something that seems to be forgotten nowadays and is leading horrible politicians to power… Anyway, answering the question, I truly believe in hard work.

Ok well… There might be one little thing. But it is more sentimental rather than superstitious. I always carry the same handkerchief for every single concert. It was given to me by my piano teacher the first time I performed as a soloist with orchestra (sometimes I can be a bit of a disaster and I forgot one – that’s why he gave me his) because it helps to clean the sweat from hands and keys – don’t worry, I wash it every now and then!

6. Where do you stand on the streaming/downloading/file-sharing/musicians-notgetting-paid-for-their-music debate?
I really like that you asked me this question. I think it is a continuously open debate and would love to hear what some of the readers at aJazzNoise have to say about it. I am myself sort of divided in two positions. One one hand, I gladly share some of my music on different platforms, like for instance the previous EP I edited with Psychic Equalizer, a live one, which was completely free to download from my website. I hope this will help people to hear my compositions and will come to the next concert!

I am currently working on my own record label and there will be an upgrade on how I present my work online. But, on the other hand, what I completely dislike is the lack of honesty of certain platforms such as Spotify. I don’t use it and wouldn’t like my music to be on there at all. They have sold themselves as the change the music industry needed, but are not so different from any other big company which only cares about making billions.

7. If money and time were no object, what would your next project be?
You know, I don’t want to sound pretentious at all, but I manage to make my dreams come true and never think of money or time as a limit. It is true that it can be very, very, very difficult when talking about budgets. But again, hard work is everything. Not only practicing and composing but promoting your own work, organizing every single detail of a production, trying the best you can to meet the right people at the right moment, etc. Many musicians, specially classical ones, tend to follow the same path our predecessors marked, but times have changed a lot and we must adapt. I believe that money is just one more tool to achieve greater things and sometimes you can even reach those by collaborating in other projects, for example. I am happy with a simple life without luxury or many things. Music and nature are much more important in my scale of values. Time is a bit different, there’s basically nothing we can do to stop it from running. Nevertheless, good planning is the key, but it takes lots of time to get experience. A paradox I suppose… At the moment I am working on several ensembles: a quartet, a string trio, a sax/piano duo, a cello/piano duo and another trio. As well as a couple of solo piano projects, one focused on contemporary classical music and another one more crossover; a really fun fusion duo with my girlfriend and of course, Psychic Equalizer. I am also writing some music for piano and a big piece for female choir, 2 pianos and percussion inspired by a poem by a very talented young writer from my home. I am literally squeezing every single second!! But I have to admit that I would love to perform with orchestra again and write many more soundtracks too. Perhaps in the future…?

“The Lonely Traveller” is available from Bandcamp: