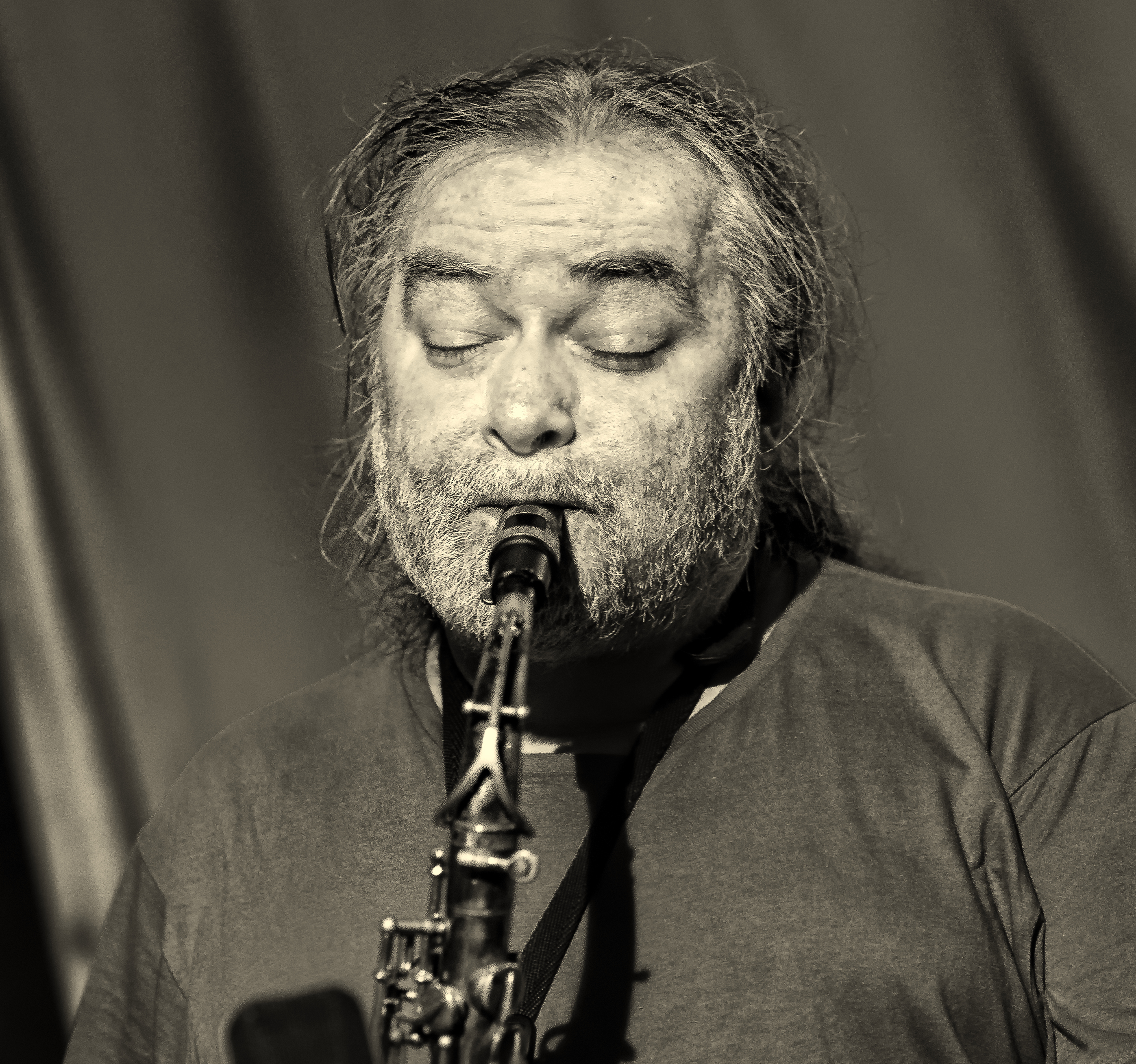 At the risk of hyperbole, Dave Jackson blows his soul through his alto – certainly, he’s channelling something and to judge from the 7 answers below, it’s coming from an instinctive, non-logical, ‘true self’ kind of place. In fact, there’s a distinct and strong spiritual element to Dave’s playing that may have a connection to the classic late 60s New Thing movement but what is clear is that for Dave Jackson, it’s all about the sound…

1. Name an experience that contributed to your becoming a musician?
I don’t think there was one experience I could point to but going to see Pink Floyd At Pompeii when I was 13 made me want to grow my hair long and make strange noises for a living – probably not the coolest thing to want to do during the punk era… I was disappointed with punk, the DIY ‘everybody can have a go’ ethos was fine, but they largely ignored most of the possibilities of anarchy and creative chaos in favour of posturing 3-chord rock’n’roll. I like rock’n’roll but there are other things that can be done with sound.

By the late 70s I was also becoming aware that there was such a thing as free improvisation which seemed to better embody true anarchy, but it would take another 5 years before I actually witnessed any of it in the flesh when I saw Derek Bailey and Barre Phillips and realised that this may be the answer to what I was looking for.

As far as free improv sax playing is concerned seeing American altoist Jeffrey Morgan making unbelievable multiphonic sax sounds upstairs at The Millstone pub in Manchester in 1986 was one of the major inspirations for my wanting to take up the sax and Peter Brotzmann’s blood-curdling tone also had a big impact on me in that same tiny room. There are lots of others who’ve inspired me along the way and most recently playing with Kate Armitage and THF Drenching was particularly rewarding since it reminded me that improvisation can be as pure and simple as breathing.

2. What was the first music you ever bought, and the most recent?
My older brother had the record player in the house so I got a cassette recorder to tape all his albums, as a result it took me a while before I actually bought any records of my own. “Live Herald” by Steve Hillage was the first album I actually bought – still got it and give it a listen occasionally when I need a blast from the past.

I don’t buy many CDs these days, I can’t afford it, but I think the last one I got was “Electronic Works 1965-19662 by Pauline Oliveros. I love all that old avant garde electronic stuff and back then with the limited technical resources available you had to really work at it to get any decent results.

Most of the music I listen to comes via YouTube and Facebook and there’s various blogs out there that keep my ears well-fed, it’s hard to digest it all.

3. What have been the best and worst moments playing live so far?
I’m not a natural performer so playing live is a nerve-wracking experience which for me involves several weeks of blind panic and sleepless nights, feeling sick and wanting to cancel, trying to get my embouchure back into shape and being completely unhappy with every aspect of my music, needing a drink before I go on to steady my nerves and finally playing and feeling totally drained afterwards, going home and being completely depressed by the whole experience and vowing I’ll never do it again only to be pleasantly surprised that the music turned out well after all…

This may be why I don’t play live very often, opening yourself up to the creative vibrations of the universe tends to make you open to all the negative things as well as the positive. Being thin-skinned and thick-skinned at the same time is difficult.

My most recent best experience was playing at Barcelona ImproFest, meeting so many wonderful talented people was a real joy.

Worst gig experiences all involve things like greedy and inept promoters, not getting paid and sleeping in places not fit for human habitation.

As for the music, it’s difficult to judge – gigs that feel disastrous when you’re doing them can turn out to be better than you’d thought when you finally listen back to the recordings and conversely the stuff that felt good when you were doing it doesn’t always turn out so well once the excitement’s worn off.

4. What qualities do you look for in a collaborator?
I don’t think you discover what a collaborator’s qualities are until you actually work with them. I’ll play with anyone who asks if I feel I can make a useful contribution to the situation. This music thrives on the unexpected, so it’s best not to have any expectations.

I’m not sure if any of the music I’ve done has come out the way I imagined and a lot of what I do as an improviser involves relinquishing control and going with the flow. It feels like I’m just letting the music happen and kind of pointing it roughly in the right direction.

I like playing with the less well-known musicians, the ones you’ve never heard of or who never get the chance to shine. Maybe I’m more comfortable with the marginalised outsiders, misfits and underdogs, there’s a shared understanding of the artistic struggle that you only get from being ignored and undervalued.

To me, it’s not a career path or a polished and well-honed artistic practice, it’s an instinctive creative yearning, an itch that has to be scratched or it’ll drive you crazy. A do or die folk art, a bending of the bars until you can crawl through and escape the mundane world…

There is a danger that free improvisation can become a stylistic mannerism rather than a mental attitude and if you’re not careful it can become a series of instrumental tricks that you get to display every so often. Most of the things that you can do with conventional instruments have been done, so maybe the future lies with those who make their own instruments and work outside the label of ‘free improvisation’ and the genre constraints that implies.

5. Free improvisation remains an obscure, niche genre – how do you find and reach an audience for your work?
Often I don’t find the audience, it finds me…

I used to promote gigs in Manchester and it was a hell of a job getting more than 10 people in the room. One of my improv colleagues reckons that wherever you go there’s only about a dozen people interested, but the problem is finding them.

A lot of people only seem to be interested in what’s cool, but unfortunately for them, some of us like it hot…

These days the omnipresence of Facebook, Bandcamp, etc. means that you can have contact with a more interesting range of musicians and listeners. It’s a pity they’re so spread out around the globe and you can’t get them all in the same room for a gig. I don’t know who most of the people are who listen to my stuff on Bandcamp, but it makes all the difference to know that someone out there likes it. Thank you, whoever you are…

It’s interesting that there’s been a shift towards free improvisation as a genre rather than a way of doing things. The idea that non-idiomatic improvisation has become an idiom has a certain irony. Perhaps music’s more of a verb than a noun…

6. Where do you stand on the streaming/downloading/file-sharing/musicians-not-getting-paid-for-their-music debate?
I’m all in favour of downloading and file sharing, it’s the only way a lot of people will ever get to hear a lot of music and it’s no different to borrowing albums and taping them like I did in my youth. No one could manage to buy all the interesting music that comes out every month and there’s more stuff out there than you could possibly listen to. File sharing often stimulates interest in obscure and forgotten artists and their work gets rediscovered as a result of cult status via downloads.

To me it’s a compliment if someone thinks that your work is worth sharing. The avid downloaders are also the people who collect rare music so maybe thats the kind of audience we want to attract – they’re music lovers, not criminals. If anyone wants to record my gigs or take photos or videos they’re quite welcome to do so, someone’s got to try and capture the moment.

The profit margins for free improv are so slim that in some respects the only purpose of putting out CDs is to make your mark on the world and get your music noticed in the hope that you can carry on and make more music.

Regarding ownership, I don’t know to what extent you can have that much control over what happens to the music once it’s left your instrument. I listen back to recordings and wonder where it all came from and was that really me that did that? So maybe I’m a bit reluctant to turn this strange magic into a capitalist commodity when it’s origins are so mysterious.

7. If money and time were no object, what would your next project be?
Take over the world, redistribute the wealth, save the planet from ecological disaster and ensure world peace…

Other than that I’d play a lot more, open an arts venue, build a studio, start a record label and go broke very quickly…

I’d love to go back to Barcelona and record with all the amazing musicians I met there… and there’s a lot of people I know via Facebook who I want to collaborate with. I’ve got another collaboration in the pipeline with local drummer and creative genius Richard Hemmings aka Evil Dick. I’ve also been swapping .wav files with a few people and overdubbing stuff, which loses the interactive element but is the only practical way of doing things until I become rich enough to travel and record with everyone. Ideally I’d go to different cities, book a studio for a few days and drag in everyone I could get hold of to play in various permutations.

I’d love to do a bunch of duo albums with Dirk Serries, Colin Webster, Dave Birchall and a long list of others. Duos and trios are my preferred format, it’s more focused and intense when there’s only a few of you playing, although I’d like to try a larger ensemble recording sometime just for the hell of it.

I want to find an electronic noise artist to work with – I like a lot of the chaotic sonic elements of the noise scene and I think some more crossover between free improv and noise would be interesting.

I’d like to play outdoors more – in forests and valleys and other places that aren’t normal venues, where there’s not that ‘bums on seats’ mentality and beer-fueled chatter. There’s been some research on the acoustic characteristics of ancient sacred sites which indicates that they knew something special about the nature of sound. There are similarities between shamanic practices and the way I approach free improv, a kind of summoning up of forces beyond your comprehension, so I’d like to pay homage to our distant ancestors and play at some of those places.