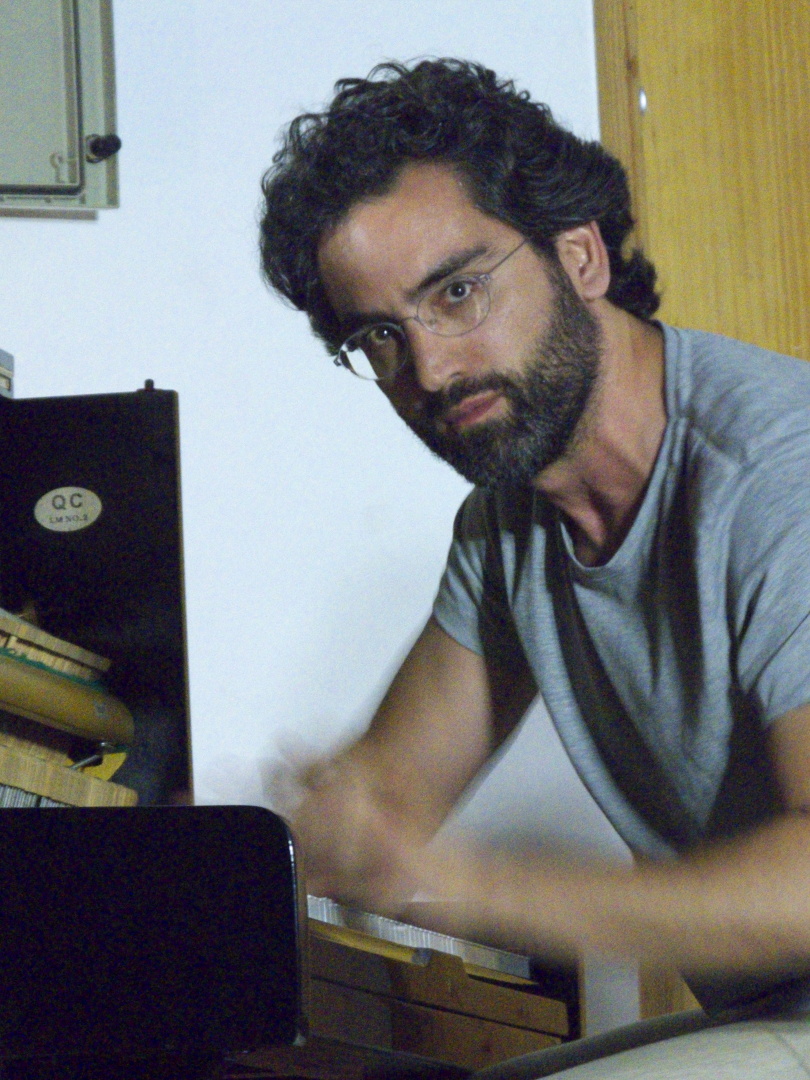 Carlo Mezzino is a tireless free improviser, with roots in both classical and jazz, whose passion for the music comes through strongly in both his playing and his advocacy and organising.

1. What was your first musical instrument, and what did it mean to you?
I started to play piano when I was five. My dad played (and still plays) piano so it was easy and natural for me to jump on the stool and starting exploring the instrument (for the cover of my first CD of free piano improvisation I took a picture of my three-year-old hands approaching the keyboard…). I could say that my first musical memory could be my father playing some Dave Brubeck tune on the piano (“Blue Rondo à la Turk” and “Take Five”, for sure). Apart from very recent (the last two years) explorations into analogic electronic realms (read modular synthesizer), the piano is my first and only instrument. I hope in the near future to explore and investigate my voice more.

What did the piano meant to me? It was (and it is) a safe place where I can always go back to rest, to think or just to play (play in all its broader meanings). I can describe it like a big old tree with huge roots and branches… where I built my home (don’t know exactly if in the roots or in the branches).

2. What was the first music you ever bought, and the most recent?
From 5 till maybe 14 (when I discovered progressive rock) I was almost mainly and exclusively listening to classical music and considering that I started to study in the music conservatory at 10, I think the first music I ever bought was some classical LPs, maybe Glenn Gould playing French and English suites. I just remembered that at that time I was not listening only to classical music but also to… soundtracks! I can clearly remember being 8 years old, lying on the sofa with huge headphones listening to Moroder’s “NeverEnding Story” soundtrack or “Back to the Future” and remembering and rebuilding in my imagination the whole movie. How weird, no?

The most recent music I bought is Josep-Maria Balanyà’s last CD, “Don’t Mind”.

3. What’s the balance of preparation vs. improvisation for the average live set or recording?
Depending on the set and the recording the preparation can be (but not necessarily) different. I mainly used and still use classical music (Bach, Bartok, Scarlatti, Debussy, Chopin, Satie, sometimes Haydn, Mozart) to warm up and keep my hands and fingers trained. But right now my main interest is totally free improvised music (not free jazz that I think, nowadays, is not strictly free improvised music but a kind of subgenre in the jazz idiom) so I try to give my hands and my ears as much diverse musical-tactile information as I can. So basically I would say I train myself to be prepared for the unexpected (that is, totally free improvised music). And how do you prepare for the unexpected? Translating the question in martial arts term (as a metaphor): how do you prepare, how do you train if you don’t know how big, how tall, how strong your opponent is, which techniques he will use, etc. Bruce Lee wrote some very interesting stuff talking about martial arts but you can extend those very ideas to improvised music: don’t stick to any specific school or style, steal from every style, don’t repeat any movement that doesn’t make sense to you just because “the master” does it that way, etc.

So, going back to your question, the real point to me is not what’s the balance between preparation vs. improvisation but “the balance” itself; to a student I would say keep your balance, keep your centre, keep you central axis well aligned between earth and sky and keep your voice as authentic as you can… the rest will follow (and this is also the answer to the next question…)

4. What’s the one quality you think every musician must have?
As I said, be authentic! Being aligned with her/his authenticity.

Basically I am trying, with the “new” tools: social networking (Facebook) and  then Bandcamp and Soundcloud. It would be very difficult, for example, to organise the LIO eventss [Laboratori d’Improvisació Oberta] without Facebook tools (the group, events, etc.) I mean it’s not impossible (there was life before Facebook… they say) but Facebook makes everything much easier. But also with some shadows. The LIO group has something like 400 people registered, maybe half from Barcelona. So the information gets to 200 people in the city and sometimes we have a LIO with twelve musicians, four dancers, two painters and an audience and sometimes we are just four musicians and two people in the audience. I will change something in the future… I think it’s increasingly difficult to really get to know all the events going on closer to you just through Facebook and the more contacts and groups you have the more difficult it is because Facebook algorithms select what you will see first. A few years ago, I used email much more to announce concerts, events, etc. – maybe I will go back to it. I think it is more effective and goes more directly to the target… well… the audience…

6. Where do you stand on the streaming/downloading/file-sharing/musicians-not-getting-paid-for-their-music debate?
Very complex question. A very simple answer could be: everyone should be fairly paid for her/his work (and then we can discuss what fairly really means). But then the question shifts into what’s the real work nowadays for a free improviser: producing recorded documents of her/his work or playing live sets? Because compared to other musical genres, free improvised music is mainly a live experience. By the way, I’d like to investigate how many people in the world nowadays really buy and listen to – digital or physical format doesn’t matter – free improvised music.

And then two important variables are which music genres we’re talking about and how famous you as a musician are in that context. Radiohead launched “In Rainbows” in 2007 as a pay-what-you-want mp3 convert; apparently a great and interesting move at that time. I was so excited by this “new” idea that I decided to buy it this way and not “illegally” download it. Then I discovered that the tracks were mp3 encoded at 160 kbps (if they really wanted to give their music for free why didn’t they put the track at 320 kbps or non-compressed formats like flac?) So now for me the conclusion from that experience is they could do it because they were Radiohead and maybe it was just another pure marketing strategy to better sell their name and the products related with their name.

But talking about our underground niche of improvised music, I wonder if it really makes such a great difference for the average free improviser to sell 30 copies of her/his self-produced CD (150 copies produced in total)?

As a free improviser, I would be very happy and excited to know that there are thousands of pirated copies of my improvised music between Spain, Japan or Australia because as a consequence this could mean gigs, contact with other improvisers, etc. Maybe the fact (and I am repeating myself) is that for free improvised music the real thing is the live set; in free improvised music compared to other genres there isn’t any great difference between a studio recording and a live recording (apart sometimes, not always, from the recording quality). So maybe for our free improvised musical world the “streaming/downloading/file-sharing/musicians-not-getting-paid-for-their-music debate” is not the “primary contradiction”; the real debate, here and now, in Barcelona is HOW and WHERE can we create more and more live situations/places where these delicate, powerful and special rituals of authentic free improvised self-expression can manifest and grow and attract more than 5 people per night… and last but not least, be fairly paid for it. The LIO events that I launched more than a year ago (we have had 16 sessions up to now) is a tentative proposal in this direction (even if it still doesn’t offer a solution for the economic point).

7. If money and time were no object, what would your next project be?
First, contacting a good piano maker and designing and building the lightest and strongest piano in the world, maybe a foldable one (but it should be able to maintain a good and powerful sound quality). And then start travelling the world with it looking for special places to spend weeks, months just playing, improvising and connecting with the “genius loci” (the spirit of the place) there through music, recording, etc. Basically trying to capture the special quality of that place through improvisation (and, why not, composition), organizing free improvised sessions there for and with the participation of the local community, etc. So, somehow unifying my double interest and identity as architect/urban planner and musician and basically using improvised music as a sensor, an antenna to explore places and their identity.

And then another project could be (coming back from these trips) to open a place in Barcelona with very good instruments, a grand piano, good PA equipment, some percussion too (a marimba, a complete drum set, etc.) to organize mainly free improvised concerts (but not only) in the good and proper conditions this music deserves and with a local and international projection.

“Piano Improvisations” and “September Sessions”  are both available via Bandcamp. On Facebook, you can find both Carlo and the LIO group.