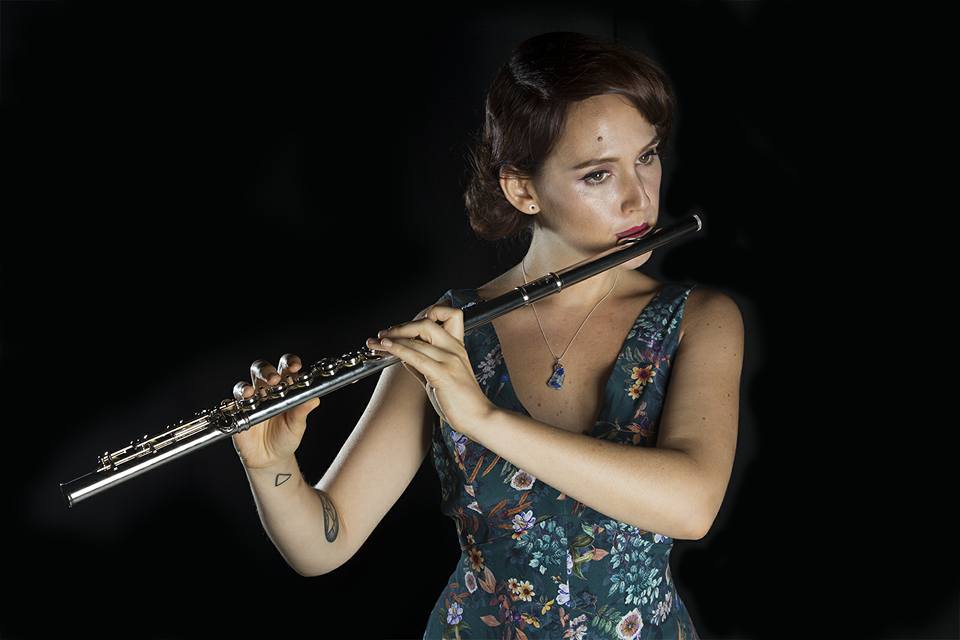 I’m pretty sure the first time I heard Almudena González play was at Barcelona’s l’Antic Teatre. Miquel Jordà had organised a performance by what he called a “submerged orchestra”, which meant musicians were hidden in the audience. It turned out Almudena was sat right in front of me (although the sudden flute in close proximity wasn’t nearly as surprising as the guy with the accordion behind me!) Anyway, with a foot in both camps – rigorous classical and free improvisation – Almudena is quite active on the Bcn scene and beyond, including various Nocturnae Discordianae, this year’s BCN ImproFest, the piano-flute duo La Inégalité, and MEI, a duo with Cristina Rosales exploring music, silence and Japanese cinema…

1. What was your first musical instrument, and what did it mean to you?
My first instrument was a drum. My father was drummer and he believed it was the best way to get into the music: through rhythm. It was red and very small as I was just 3 years old. It meant a strong link to the rhythm and beats of the music, which is still a very strong point for me.

2. What was the first music you ever bought, and the most recent?
The first cd I bought was “Adagio Karajan”, I think it’s still around at home… I cannot remember. The last one was “Revelation” by Agustí Fernández and Yasmin Azaiez, given to me by Agustí himself.

3. What’s the balance of preparation vs. improvisation for the average live set or recording?
The preparation of a classical concert or recording is very different from a free improvisation one. In free improv, you have to work your own language and colours, practice improvising with others and learning what works best in any situation. But you don’t need to practice 4 hours a day, you can but it is not necessary. With classical music you have to learn the score and then develop your colours, practice technique, your own vision and interpretation, but always inside a box. I really enjoy both, but definitely I could not do just classical music or just free improv.

4. Who is the most inspiring person you’ve collaborated with, and why?
Wil Offermans. He is a flute player and composer from the Netherlands. He introduced me to improvisation, Japanese music and contemporary music when I was 17 years old. He completely changed my vision of music and the flute’s possibilities. He gave me all the keys to start to research all the colours and techniques of my instrument. I highly recommend flute players and composers check out his website: www.wiloffermans.com . The other one is Wissam Boustany, my first teacher in London… I will always keep him in my heart, he is the most wonderful teacher for flute I ever met and he encouraged me with improvisation as well. In fact improv is one of the conservatory entry exams which I found most interesting.

5. Free improvisation remains an obscure, niche genre – how do you find and reach an audience for your work?
Well, I do not usually look for an audience for those concerts as I sell music as music, without too much regard for genre. In that way some people will hate it and some others will discover a great thing they did not know of… but still there is a small audience as a small group of musicians is doing it. But I have to say, that is growing!

6. Where do you stand on the streaming/downloading/file-sharing/musicians-not-getting-paid-for-their-music debate?
I am not the best to answer that question… I am fully aware I would not make money from a recording, so I just see the side of reaching more people to hear my work.

7. If money and time were no object, what would your next project be?
I would do a project that I am already doing but in a bigger format. This idea started five years ago in the mountains were my Mum lives in Southern Italy. I discovered an area of deep woods there, where the trees were so tall that one could not see the sky. This spot offered one of the best acoustics I had ever heard – I am crazy about spaces and acoustics and I kept going back to play twice a year. Finally, last August I could start a series of recordings which I called “Sessions in the Forest”, improvising with those acoustics and the sounds of the forest. I went with my good friend the clarinettist Luiz Rocha to record as we recently formed a duo and we were playing a free improv festival nearby; we recorded an amazing video that was released recently. My dream is to do this every summer with different musicians, and in the future organise a mini free improv festival in that place in the middle of the forest. But… as always… I need money or a good sponsor.

(The title photo is © Ila Ria)