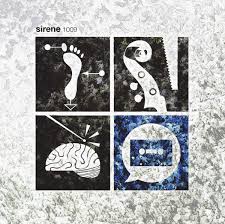 If you believe music requires structure and repetition then this is going to be an uneasy though potentially mind-expanding listen. Sirene 1009 don’t so much push the envelope of improvisation as tear it into small pieces and eat them, just to spite any listener preconceptions.

In their own words they are, “…the cyborg virtuosity of Han-earl Park, the indomitable low-end growl of Dominic Lash, the unstoppable hits and clangs of Mark Sanders, and the controlled vocal mayhem of Caroline Pugh.” But that falls far short of the full creative insanity unleashed here.

The Asimovian Psychohistory III opens with full-on pickup abuse and seemingly random bass and percussion in which hints of structure are deeply buried, supporting violent non-verbal interpolations. Noisy but far from mere noise. The primordial apparent chaos halts, leaving painterly bass notes to accompany Pugh’s gasping vocals – like Diamanda Galás constantly on the verge of asphyxiation – and a slowly building percussive filigree and guitaristic smears. The Cliodynamics ‘suite’ begins with a recitation in an obscure (likely bespoke) language that rapidly deconstructs against the backdrop of Park’s angular, truncated proto-phrasing, Sanders’ demented clockwork drums, and Lash’s lower register punctuation. Pugh’s voice acts as a kind of guide, offering a frayed and twisted thread through a dynamic and often intimidating soundscape; a necessary albeit illusory anchor. A final wry touch is last two minutes of the closing Psychohistory V, a minimalist coda you have dial the volume right up to even hear – putting the listener in the position of chasing the chaos that moments earlier was so overwhelming.

If this attempt at description sounds rather confused, I’ll try to summarise: years ago, Derek Bailey coined the term ‘non-idiomatic improvisation’, a label that over the years has practically become an idiom in its own right. Sirene 1009 may just be the auditory experience that Bailey’s label has been waiting for.