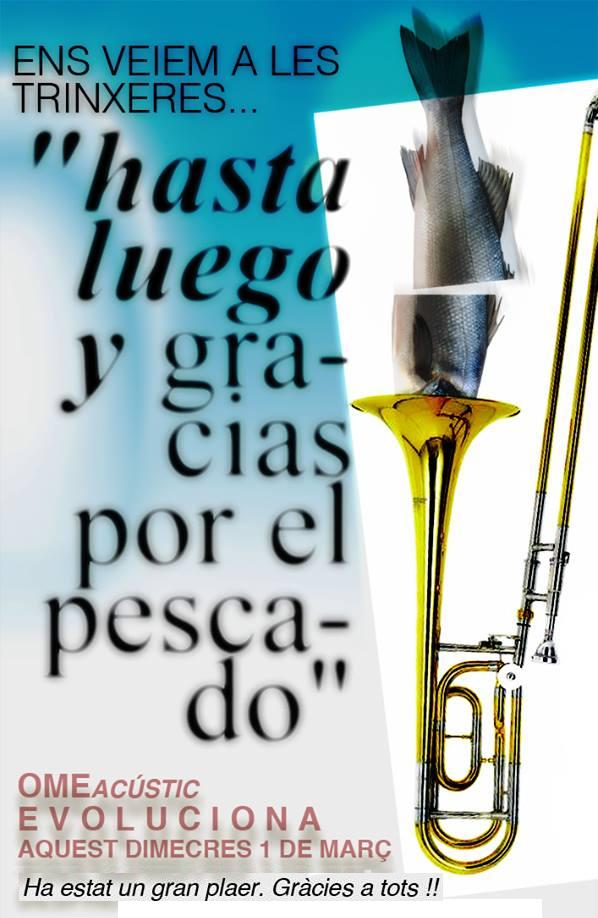 Although I’ve been lurking around, observing the Barcelona improvisation scene for two or three years now, I’m a bit surprised (or ashamed) that I’ve only just bumped into OME Acustic. A few of the names were familiar (including the members of Zer0deConducta) but for the most part, the people and the project were new to me… probably a sign of good programming on the part of the BCN ImproFest, of which this was part.

The advertised title for the concert was also intriguing: “fins després i gràcies pel peix”. My Catalan is shaky (good for signposts and menus and not much else) but it was also advertised in Castellano: “hasta luego y gracias por el pescado” and my best translation is the Adams-esque, “So long and thanks for all the fish”. Hmmm…

As the ensemble name suggests, everyone is playing a variety of acoustic instruments; no microphones, amplifiers or squalling feedback here. And the outcome has a very unhurried quality compared to the more agressively free jazz-inspired all-leap-in-and-sort-out-the-noise approach. The deliberately unhurried layering of sounds, plus the inclusion of actual steady rhythms results in a gently chaotic, still-minimal soundworld that frequently teeters in the edge of creating an instant song.

As the above list suggests, there are plenty of unconventional sounds and instruments here – a wound guitar string rubbed against the music stand, a prepared miniature table football game, conch shells, slide ukelele, fragmented vocalisations – alongside the more regular acoustic guitars, piano, and percussion.

Perhaps it’s that variety of sounds, or perhaps the quasi-telepathic communication between the sound-makers but the ambience is nicely unpredictable, very meditative, a gentle maelstrom of sound out of which who knows what might emerge, and that speaks to a particular inner segment of the brain.

OME Acústic I definitely a project that needs a higher profile and certainly, they’re an ensemble I’d like to hear more of. So long and thanks for all the fish? Hopefully, these particular dolphins have not yet left the planet.