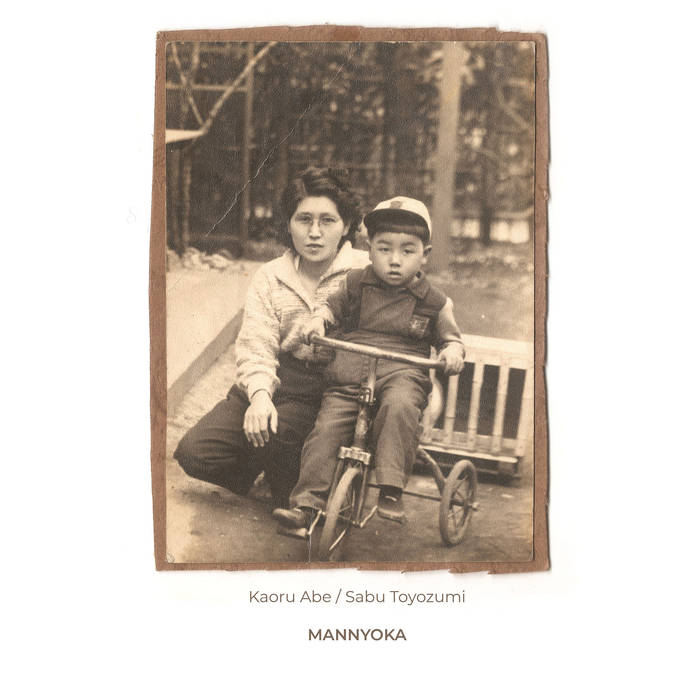 I think that’s all I really need to say…

I first encountered Kaoru Abe’s name about 15 years ago in Nick Cain’s Opprobrium zine, but the cd’s being reviewed were expensive and hard to obtain japanese imports so the only practical way to hear his music was via whatever bits were on youtube. So when I saw this release was coming out, I decided to take the plunge and buy a copy and find out what was really going on with these two legendary musicians..

Some have suggested that Kaoru Abe was burnt out by the end of his short career, messed up on booze and the sleeping tablets that ultimately killed him in an accidental overdose. I’ve no idea what was in his bloodstream at the time of these recordings, but on this album, he’s bursting with creativity and sounds like he still had plenty left to say, pushing his instrument to extremes – from firey outbursts to unexpected delicacy. His reputation for relentless intensity doesn’t take into account the quieter more reflective moments – tender little squeaks and moans that reveal an intensity of a different kind.

A self taught musician who seems not to have been fixated by practising scales or mastering bebop chord changes, Abe found a different, more personal route to self expression and focused his energy on creating a unique sound and a more personal, vocal use of timbre and pitch that some people view as an indication of some kind of emotional pain.

It’s a cliche to think of free jazz as angry or angst ridden –  what do we know of the inner life of the artist or why they’re driven to create?

Do musicians ever know why their music comes out the way it does? Is it like a baby’s cry, seeking warmth and nourishment, or a yearning for something deeper, a life with more meaning than mundane existence?

Maybe it’s a positive thing, a cry of freedom or defiance… or just an exploration of the sonic extremes of your instrument, trying to make it do the undoable.

Is it even valid to judge this music by western standards? Japanese traditional music seems to use pitch, timbre, rhythm and dynamics in a completely different manner to what’s normal in the west, so leaping to conclusions about inner torment just because someone uses those elements in a different way to what’s generally considered acceptable in jazz may just be a form of cultural bias.

The very language we use to describe complex sounds is often negative, but dissonance can be positive, can’t it?

The sounds we make aren’t always directly connected to our emotional state or what’s going on in the conscious mind. Often things just happen, the product of an instinct we don’t understand but strive to connect with.

Perhaps the music seeks to provide answers, if only we’d listen without judgement.

And of course this isn’t just about the saxophone playing.

Both musicians are constantly sparking ideas off each other, neither leading or following but playfully running free in the hills and valleys of musical expression, exuberantly calling out to each other or stopping to comment on the view, enjoying the light and shade and colour for it’s own sake.

Sabu Toyozumi, is a master of technique who never lets the technique master him. He seems to be in pursuit of a higher beauty than most of us could imagine. You can tell a lot about a drummer from the way he tunes his kit and Sabu has a glowing, elemental tone, welcoming like an open fire on a cold winter’s night in an ancient forest, crackling with energy and passion, receptive to all the musical fuel that Abe can throw at him while generating more yet warmth to invigorate the music. It’s not about raw power though, there’s delicacy, texture and agility aplenty – you really couldn’t ask for a better drummer to accompany you on your explorations. There may be echoes of Ed Blackwell or Milford Graves – that same generous musicality, but Sabu defies all comparison, he’s in a class of his own.

I was bit nervous of listening to this album and left it sealed for a few weeks. I’ve done plenty of sax and drums duo improvising over the years and I don’t always want to listen to what other people get up to in case it influences my playing or if it’s just far better than anything I could manage.

And I was right to be worried, you couldn’t go much further than these two. I know it’s not a competition and there’s room for everyone, but this just puts the rest of us out of a job.

Before I leave, I should mention that the sleeve notes by Julien Palomo are well worth a read. Based on conversations with Sabu Toyozumi, we get a more rounded and human picture of Kaoru Abe, different to the ‘live fast, die young’ tortured genius cliches you sometimes get.

Speaking of pictures, there are some photos of Abe’s saxophone and mouthpiece. This may not be at all interesting to most people, but for us sax players it’s a bit of a shock to find out that he was getting such extraordinary sounds  out of such an ordinary Selmer mouthpiece.

Just one more piece in the puzzle..

This album has been painstakingly remastered from a battered old cassette, and yet the music is as fresh as tomorrow….

So, if you’ve not already added it to your collection, consider buying this before it sells out and becomes another collector’s rarity, like so many other Abe cd’s.

There’s also a vinyl version, for those of you who prefer such things, although it only has the January 13th recordings – http://nobusinessrecords.com/banka-lp.html