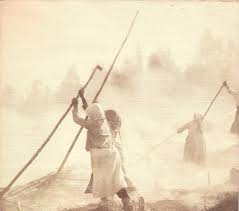 Desert Ride
Ghatika
Bruremarsj
Tutankhamon
Receive Me
Trav’lin Light
Huilua
Moving Fingers
Peace is the Language of the Stones and the Stars
(55:44)

On this disc, Jorma Tapio and Kaski are channeling the instrumental spiritual quests of Coltrane, Ayler and others from the mid- to late 60s. The resulting spirituals, ballads, traditional tunes (plus a touch of both Malachi Favors and Billie Holiday) have their roots in the strength, power and presence of a highly focused slice of jazz history. Yet the branches go further than the roots: Eastern influences, African threads, folk-ish themes… and all with a perfectly judged sense of space and nuance.

Jorma Tapio is known for his work with percussionist/composer Edward Vesala’s Sound & Fury (which ensemble he now leads – try the 2013 disc “Pulsacion” on Ektro Records). As well as this Kaski collaboration, he’s one half of the Tapio & Tuomi Duo wth drummer Janne Tuomi, picking up where Coltrane/Ali left off. Kaski is Ville Rauhala and Simo Laihonen, two-thirds of relentless Tampere band, Black Motor. Rauhala works in countless settings, including Hot Heros (with Sami Sippola and Janne Tuomi) and Raoul Björkenheim’s Triad). Laihonen works in a duo setting with Mikko Innanen (double CD out soon on Eclipse Music) and has the drum chair in Sound & Fury.

Tracks one and two, Desert Ride and Ghatika, set the mood. The first is all circular melodic invention and Africa-tinged rhythmic paths, with Tapio’s burred flute tone spiralling upwards in a ritualistic appeal. The second features a less direct, darker flute (alto, I think), minimalist bass, and a variety of percussive grace notes (shakers, bells, etc.) that contrive an Eastern temple flavour.

The traditional Bruremarsj revolves around a deceptively simple tenor melody, Laihonen’s trademark delicacy of touch is in full evidence (very engaging drum solo too!), and Rahuala’s low end nimbly weaves and merges with Tapio’s horn. The journey continues through the brooding Tutankhamon, the distant thunder of Receive Me,  and on. Huilua is another highlight, with Rauhala’s arco bass moving from pastoral to menacing while Tapio’s flute is playful and subtly transporting. And everything comes together on the unhurried Peace is the Language of the Stones and the Stars. Droning, winding, hypnotic bass; painterly percussion, with swathes and splashes of colour; and of course, Tapio at his most elegiac, calling down the heavens: a stately yet fervent dialogue between the three musicians and perhaps something beyond…

Whatever your faith/spirituality (or lack of) just trust this music – whether you pierce the veil or not, it won’t leave you where it found you.