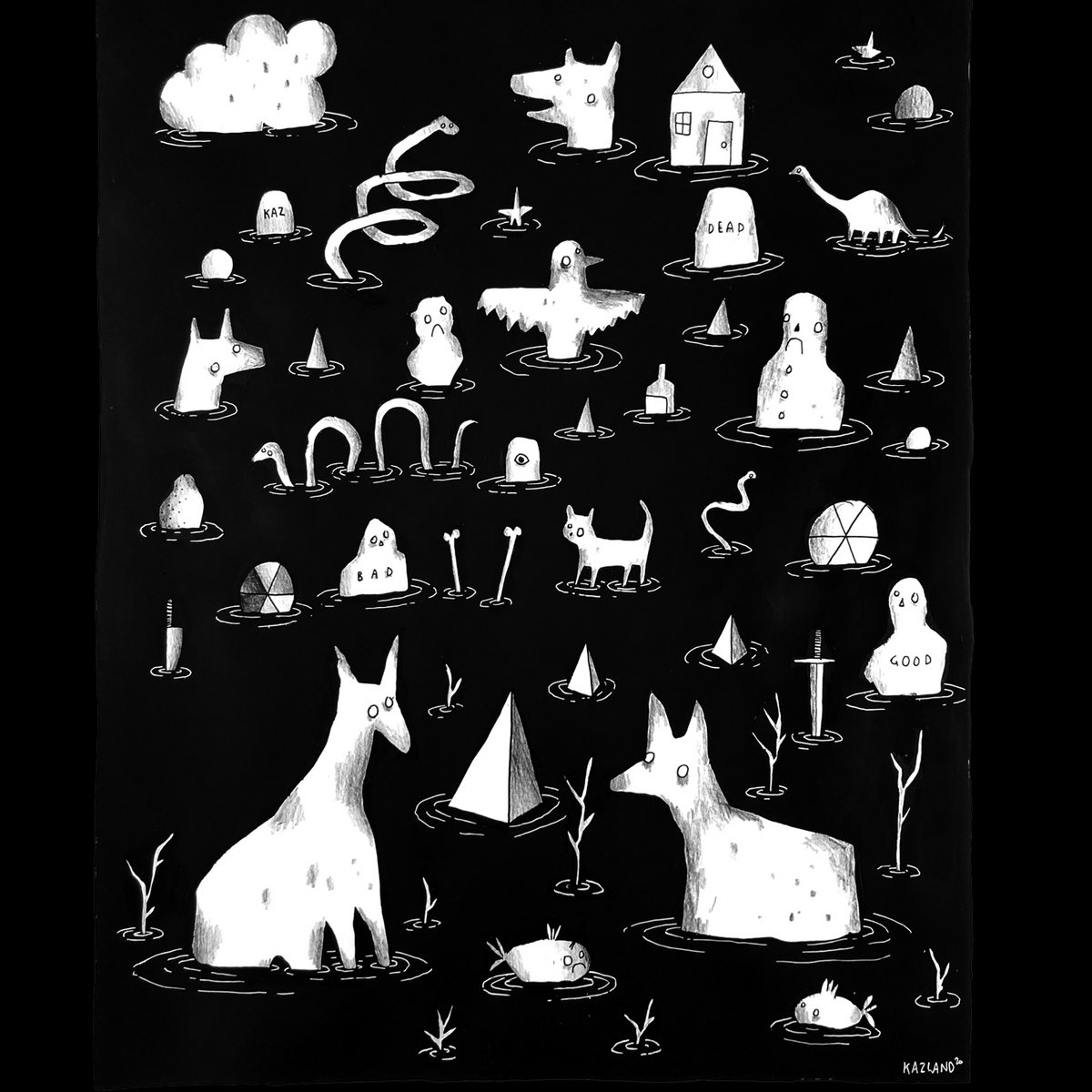 Whereas Molar Wrench – Sly & The Family Drøne’s 2017 collaboration with Dead Neanderthals – was a bathyscaphe to the depths of density, this meeting with London’s Jamaica!! is ear-to-ear grinning fun. (Which is not to imply any lack of solidity to the sound here, far from it – at times there are up to eight drummer/percussionists blamming away at once!)

What we get here is a more deliberate pacing which (on Side One) results in an almost horror film soundtrack ambience. I can feel the POV moving down a darkened hallway, past  an endless series of closed, rusty iron doors, behind which you can be sure your supernatural nemesis lurks. And all accompanied by percussion that is almost jaunty in its obvious good humour. Weird. But good weird.

Or maybe ‘nemesis’ is too inevitable – it’s possible they’re just here to gently torture you for shits and giggles… if so, colour me a masochist and plug me in.

The prominent, semi-steady (this is Sly, you can expect them to mess with your ears a little) beats is an unbroken line on which they hang the elements of unique ritual: shrieks, barps (burp+parp=barp, okay?), prehistoric bird-cries, wired feedback, electronic commentary, and a sackful of irritated snakes… It casts a spell and through the dimensional portal, we glimpse a landscape of raw bliss and violently-coloured wonder.

On Side Two, we’re inside the world’s largest jam jar with a respectable swarm of giant, slightly-peeved (though ultimately, amicably rhythmic) wasps. Maybe the jar breaks, maybe the wasps unscrewed the lid… either way, the chaos magick that ensues includes brassier threads, the drones are centre-stage, hand-in-hand with the percussion, and there’s even a drum solo or two. And once again, it’s infused with a sense of fun, swagger and sway. Good times at The Gate.

Just in case you skipped to the end… the press release describes Celebrating The End Together In The Good Time Swamp as “joyful noise”. Yep, that’ll do it.

An aside: I arrived here via Sly & The Family Drøne, but The Gate’s Jamaica!! is an improvising noise collective worth investigating. The Gate is an arts centre for adults with learning disabilities, located in Shepherds Bush, London. Membership of Jamaica!! is whoever’s there, the instruments are often modified, and “notions of what makes sense musically” are abandoned. Other releases from Jamaica!! can be found on The Gate’s Bandcamp page.