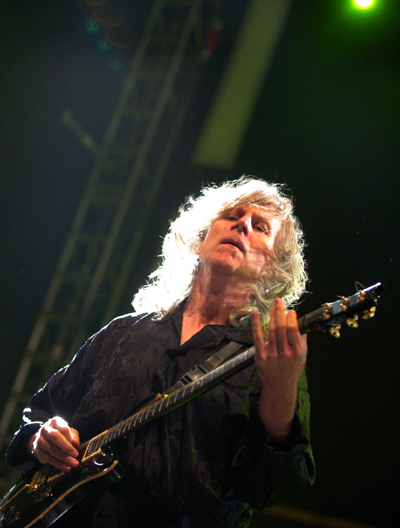 Nick Didkovsky is approximately one-third of Eris 136199, with Han-earl Park and Catherine Sikora. The new, eponymous Eris 136199 album is out on 9th October, pre-ordering now on Bandcamp and it’s been the catalyst for a trio of 7Qs interviews (Catherine Sikora was posted last week; an updated Park will be out next…) Anyway, gorgeous melée of unpredictable delight Eris 136199 may be, there’s plenty else to love in Didkovsky’s other works. Not least “Phantom Words”, of which Han-earl Park has said, “Nothing like guitar as I would imagine it. Music to lose yourself in (in the best possible way). You find yourself melting right into it… You should go and download it. Right now.” And the melting only intensifies on on “Chord”, a double electric guitar recording with Tom Marsan. Then there’s Vomit Fist, Didkovsky’s metal band. Oh, and his tribute to Alice Cooper’s “Pretties For You”. Not forgetting Doctor Nerve, the experimental, genre-leaping rock band he founded back in 1983. Where did it all begin…?

1. Name an experience that contributed to your becoming a musician?
A very positive early experience was watching my grandmother play piano. She wasn’t especially great, but she explained a lot about music and about performing with feeling. Her joy in it was palpable; there was always sheet music open on her piano, with hand-written notes to herself all over it. Beyond her words, I could really feel how she immersed herself in it. She was a strong model for making music out of the sheer love of it.

A very negative experience happened to me as an undergrad. I was taking a course in 16th and 17th Century Harmony, and for the final project, we were offered the choice to either harmonize a figured bass or compose an original piece. I chose the latter, worked very hard on it, and had a friend of mine with keyboard skills play through it to check it out the day before it was due. We dug it. During the final presentation in class, the student ensemble tried playing it but they fell apart after two or three bars and the professor stopped them. He then held the score up like Perseus holding up Medusa’s head, sniffed like a snob, and proclaimed, “You would have thought he’d have resolved the 7th.” Pretty humiliating. This same keyboard friend of mine joked me out of it that evening, which was very helpful. A few days later a jerk who lived down the hall asked me about it with a sort of smug glee, and that was the extra nudge I needed to get over it, haha … as a sort of act of defiance I resolved to continue to make music. I think that experience clarified my sense that musical value doesn’t rely on hierarchical approval; and not just understanding that idea logically, but really feeling it deeply. It really makes me wonder how much music we are missing because young people were discouraged by destructive people in positions of authority.

Last weekend I saw a superb grindcore band called Meth. Aggressive, mathy, patient, experimental, huge sound. They only had cassettes to sell, and I don’t have a cassette player anymore, so I resigned myself to buying yet another t-shirt I can’t wear to work, and downloaded their records off Bandcamp.

Recently heard a recording of a radio broadcast of the Alice Cooper group Mar Y Sol Pop Festival in Puerto Rico on April 2, 1972, which is very clearly recorded with plenty of separation between instruments; I’ve re-listened a bunch of times. You can learn a lot about how Michael Bruce and Glen Buxton split up their guitar parts, as this was recorded before the band started touring with an additional guitarist.

3. What’s the balance of preparation vs. improvisation for the average live set or recording?
With Eris 136199 we just set up and play (that’s my impression anyway, maybe I am overlooking some secret preparation rituals!). It really feels like everyone’s been sort of preparing for years before every performance. When we play I feel like we are being dropped back into a continuum that has been periodically interrupted. We really don’t discuss much ahead of time other than the notion that the silent shrieks of crustaceans may be ensconced in shrimp crackers and are released when you bite them.

4. What are your non-musical influences?
The art of Paul Klee; I find that the spirit of his work really resonates with me. I love the sense of humor, the playfulness, rich colors and geometry, and I love how important the titles of his paintings and drawing are. His titles are like perfect one-line poems: “Two Men Meet, Each Believing the Other to Be of Higher Rank” , “Once Emerged from the Gray of Night…”, and other wonderful examples. When I come up with a title for an instrumental piece which doesn’t have lyrics to influence the decision (for Doctor Nerve for example), I try to create a title that lives in its own creative place, so that while it is connected to a piece of music, it has an independent life. I feel like Klee’s approach to titling his art shares a similar spirit.

I am also influenced by mathematical systems as purely abstract structures, so when Erno Landvai’s book on Bartok’s compositional techniques came into my life, it was a good moment for me, as it drew clear lines between abstract mathematical systems and music. Later, I was very inspired by the Luring Lottery, which was a variation of a Prisoner’s Dilemma. The Luring Lottery sets up an inverse relationship between the desire to win prize money and how much the winner actually receives. A beautiful idea that I wanted to apply to sound, using control over sound as a resource instead of prize money. It was the spark that got me into making computer music, thanks to the advice of Pauline Oliveros and the guidance of Larry Polansky.

Both of these influences led to musical projects, “Flies In The Face of Logic” (Pogus Productions) which is a CD that includes computer-driven piano pieces based on Klee’s paintings, and “Lottery: Toward a Unified Rational Strategy for Cooperative Music Making” which was a paper published in Leonardo Music Journal. I am proud that the “Flies…” CD is part of the library’s collection at the Zentrum Paul Klee in Bern, Switzerland.

5. What qualities do you look for in a collaborator?
Open mindedness and a sense of humor.

6. Where do you stand on the streaming/downloading/file-sharing/musicians-not-getting-paid-for-their-music debate?
Consent is key. If someone requests that you to pay for a creation, you should either pay for it or live without owning it, as opposed to taking it for free and then rationalizing that act with a unilateral philosophy to which the artist did not consent.

When I see a live show of mine (not an official release, but an audience recording for example) on a sharing site, I support it by meticulously correcting the set list. But if some band doesn’t want recordings of their live shows shared, that’s their right. I don’t think it’s very complicated, honestly. Consent.

7. If money and time were no object, what would your next project be?
I would record “Human Dog”, which is a piece I composed for ETHEL String Quartet and Kevin Gallagher’s chamber rock quartet Electric Kompany. E.K. no longer exists, alas, but it would be great to assemble the talent to record this work.

If time and money were truly no object, I would take Vomit Fist on a world tour, and then I would commission someone to develop a safe way to get to Mars and back and play a show there with Doctor Nerve. I would like to fly into orbit and perform with Eris 136199 in weightlessness… it would be amazing if Han and I finished by doing that jump from space like Felix Baumgartner did, but we’d hold on to our guitars and watch them burn when we hit the atmosphere (I recognize I am misrepresenting the physics of re-entry a little, but really, just picture that for a moment). I’m not leaving Catherine out of this, she can jump too, but there’s more of a tradition of burning guitars than there is of burning saxophones, so a trio jump didn’t immediately pop into mind.

I would open a guitar library where people could come in and check out a guitar that they otherwise might not be able to access, and play it through any of a variety of magnificent amps.

Finally, if money were no object, I would establish “The Shitty Gig Foundation” whose mission it is to administer “The Shitty Gig Fund.” It would be easy to get a grant from The Shitty Gig Fund: you’d just write us a sincere letter telling us about your shitty gig, and we’d send you some money to make you feel a little better. Something like $25 to cover the flat tire you got outside Baltimore, or $40 toward dinner you had to buy for everyone in the band because the promoter reneged on his promise to provide a meal, or $30 to pay for gas for a gig where the door guy split before you could find him and get paid. There’d be no restrictions on genre or style for you to apply to the Shitty Gig Fund. Just don’t lie and tell us a gig was shitty when it really wasn’t that shitty, don’t expect more than $50 or so, and don’t ask too often, because there’s lots of musicians out there doing shitty gigs and we’d want to send feel-good chunks of money to as many as we could just to take the edge off and let them know someone loves them. 5 thoughts on “7 Questions for… Nick Didkovsky”