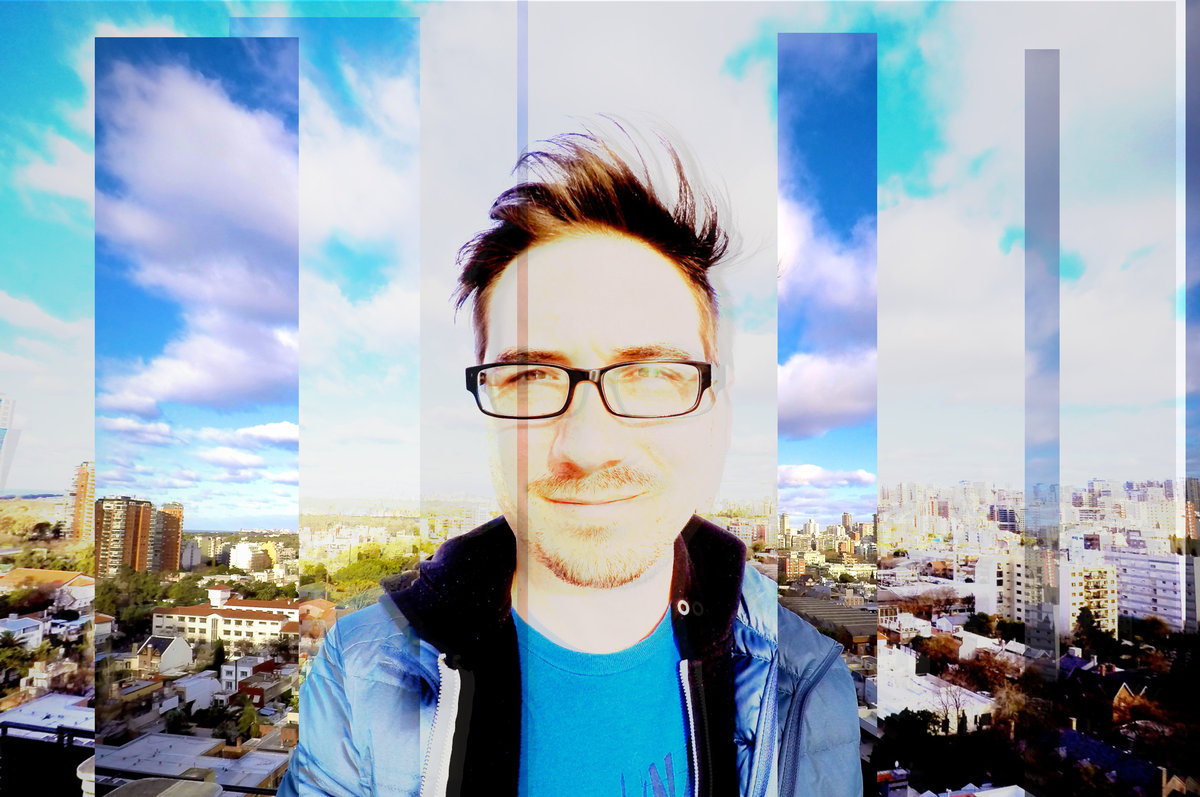 Hailing from the US but resident in Buenos Aires, Matthew Golombisky is bassist, composer, improviser, conductor, teacher, and the man behind Chicago’s ears&eyes Records. “Contemporary jazz” is a label so often used it’s virtually meaningless and yet the output of ears&eyes is music that honours the jazz tradition (whatever that is!) while always presenting something fresh, some nuance or unexpected subtlety that makes it both familiar and new. As for MG’s own projects, to name just two, the Cuentos collaborations are chronicles of his residence in various cities (the third volume is pre-ordering now for a 16th November release) and the Tomorrow Music Orchestra brings out the big(ger) band compositions. For more, read on…

1. What was your first musical instrument, and what did it mean to you?
My very first instrument was the snare drum. I was four or five. If I remember correctly the same Christmas day I received it, I tore the head by bashing too hard, and my folks never replaced it. When I was about 8 or 9, I started playing ‘Taps’ and ‘Reveille’ on the bugle in the Cub Scouts. But I’d consider the cornet to be my first instrument.

When entering the sixth grade, I chose concert band as my elective and wanted to play the alto sax, but they were too expensive and my dad had an old cornet in the attic, so there I was playing the cornet. And I loved it! A few years later, I wanted to play in a metal band with a friend and thought playing drums would be the coolest and most fun, but again, it was too expensive so I saved up and bought an electric bass instead. From there bass (and then contrabass) became my steady instruments.

2. What’s your ‘guilty’ listening pleasure? (i.e. something you listen to in secret?)
In total secret, I’m not sure I have anything. But something that might be unexpected is that I love ABBA! ‘Dancing Queen’ is one of my jams! It might be surprising that I listen to a lot of pop too, mostly to study production techniques, and I’ve been digging The Weeknd and Charlie Puth lately.

3. What’s the starting point for a composition?
There are a lot of different launching points for me. Usually, it starts with a specific concert or recording session I have coming up. That usually sets up a specific set of challenges, limitations and/or restrictions whether it be the instrumentation, the size of the scope of the project, if the players are strong improvisers, whether or not there’s a projector at the venue, and what’s occupying my state of mind at the moment.

Sometimes compositions come from “practice sessions”. I say “practice” because though I’ll set out to practice a certain concept, rhythm, harmonic structure, etc., I always wander off into a session of improvising which often leads to a composition.

One composition technique I feel works for me and something I hold close is that once the opening statement or theme or chordal structure is composed, the rest of the work composes itself. Because after the initial idea, the second idea either works or doesn’t work. The same goes for the third, fourth, fifth, etc. and by the time all is said and done, the composition is complete. I hardly ever go back and make changes.

4. What are your non-musical influences?
The outdoors, the weather, cloud formations to name a few of the positives. And unfortunately, nowadays, the news and state of the world work their way in there as it’s hard for me to ignore.

In my early jazz developing years, I owe a lot to guitarist Sam Macy. And I certainly wouldn’t have as many fresh ideas as I do without a long-time collaborator and friend Quin Kirchner. We met in 2001, when we were both living in New Orleans. Though we aren’t able to play as often as we used to, there was a lot of growth during our active years in the same cities (NOLA and Chicago). I owe him and the groups/musicians we played with a lot of credit for my on-the-spot creativity. And with another important musical cohort, our trio with Caroline Davis is something that’s a pushing-forward element for me.

And then three of my past teachers/professors that were integral in my growth and curiosity were Erich Haas (high school jazz band director the guy who gave me the idea to “play bass to eat”), Dr. Joyce Dorr (undergrad classical music theory professor who opened my mind to a whole world of music I hadn’t come across just yet, 20th Century Classical music) and Dr. Jerry Sieg (graduate school professor, every class was taken with him!).

6. Where do you stand on the streaming/downloading/file-sharing/musicians-not-getting-paid-for-their-music debates?
I have a lot conflicting feelings about the “free-streamers” from anger to disrespect to “oh well, if you can’t beat them, join them” to “it’s another useful tool to reach a larger audience.” I use Bandcamp, my website, Pandora, and all the “free-streamers” in a manner that I feel generates the most possible sales and then the generation of a larger audience. Whether my theories hold true, I’m not 100% certain, but I feel good about using any and all resources for selling and promoting my (and ears&eyes Records artists’) music. It’s also hard for me to tell which came first, the chicken or the egg. In this example, one is society in general, the other is free-streamers. Did society as a whole, secretly and unconsciously lose the respect of music/arts, and free-streamers swooped in and took advantage of it? Or did the free-streamers come first, and they’re responsible for the lack of respect overall? Of course, these are generalizations, but they make me wonder.

7. What’s next? (musically, geographically, recording, tours, ensembles, anything…)
What’s next? I’m finishing producing an EP for a pop/rock group, The Wild Oaks, based in Buenos Aires with cats from USA/Mexico and South Africa which has been a fun and explorative ride. I’m about to start a new recording project with a group I have, HiroM@! which includes a good friend from Japan living in Buenos Aires. It’s a drums and bass duo with loads of effects, percussion, toys, vocals, melodica, bells and whistles and sometimes guest artists. We plan to release June next year.

I’ve also reawakened my large ensemble concept, Tomorrow Music Orchestra, with some of the most inspiring musicians in Buenos Aires; wow, these guys and gals really get my gears churning for composing new works.

With ears&eyes Records, I’m looking forward to an exciting line-up for 2019 (and into 2020) including some old, close friends I’m releasing as well as more from Buenos Aires (there’s an intensely invigorating energy in the “new” jazz world happening here).

And very recently, I’m embarking on a really cool music publicity agency that’s going to offer affordable and creative ways to get artists I believe in further exposure. I have a great team of folks working with me to launch Thirsty Robot Media in 2019!

Finally, I’m trying to filter all the negative news and events coming out of the USA through my music as a sort meditative therapy session. It works …sometimes. In the Cuentos Volume 3 release coming out this November there are two compositions (#17 & #18) that are reactions to the Charlottesville tragedy; #17 functions as people watch the event unfold in utter surprise filled with sadness and #18 starts with the anger that the “leader of the free world” didn’t exactly disapprove the tragedy, concluding with what will hopefully be a positive overall result (not yet to be realized or seen). Most recently, I composed “F*ck you and your detention camps for kids” for Tomorrow Music Orchestra, as a mournful look at a very disgusting situation in the US’s history.