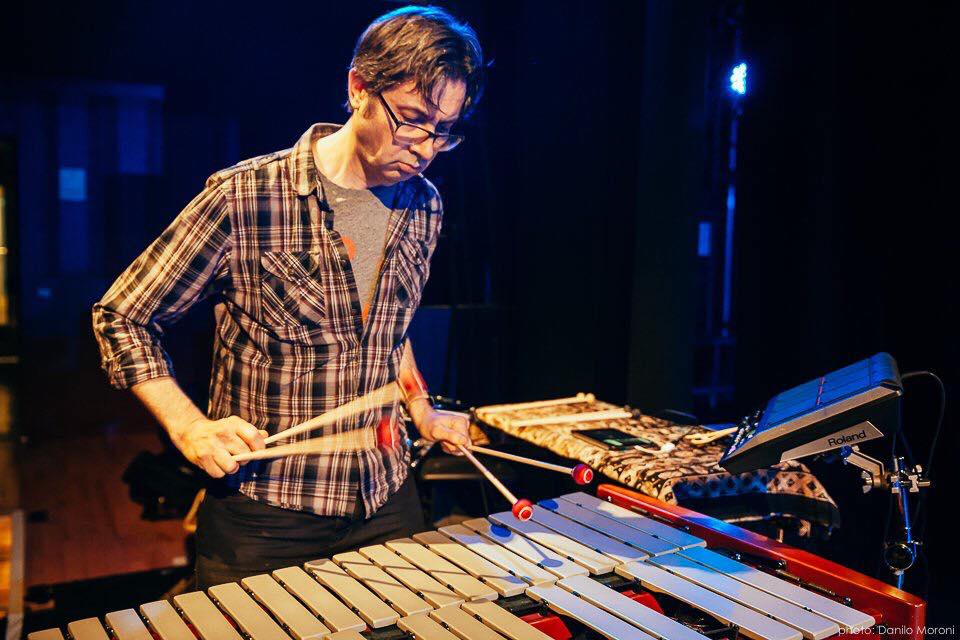 Vibraphone player, percussionist, improviser, and composer, Martin Pyne turns his mallets to many different projects, including the edgily upbeat Busnoys (check out their debut “San Angelo“), silent film soundtracks (maybe that should be ‘soundtracks for silent films’), whimsical representations of Faerie (the frankly lovely Behind the Mist album), and free improvisation. If I knew what the phrase “musician’s musician” really meant, I’d probably apply it to him. Suffice to say, from the 7 answers below, there’s an awful lot of fascinating music to explore…

1. Name an experience that contributed to your becoming a musician?
There were so many people, and experiences that led to that. I was lucky enough to have many great teachers from a wide range of backgrounds, and I was able to hear a lot of live music as I grew up. The sound of music did weave a magic spell over me I guess, and from very early on I wanted to be able to replicate that so I started trying to create my own music. I do remember taping a Radio 3 programme presented by Peter Clayton, all about Duke Ellington, which completely mesmerised me. But I had a similar experience in a cafe one day the first time I heard Joni Mitchell. My gateway into free improv was buying a second hand copy of “El Corazon” by Don Cherry and Ed Blackwell, just as, a little later “Music by Ry Cooper” opened the door to country and Americana! At some point I guess it was inevitable music was what I would try and do (I’m still trying!)

2. What’s your ‘guilty’ listening pleasure? (i.e. something you listen to in secret?)
Well, I listen to a vast range of music, and I don’t feel guilty about any of it. Classical, country, jazz, pop, prog, folk, improv, lots of “world” musics  – I listen to all that stuff on a regular basis. I think you should listen widely, and listen in a flexible manner. Different music works in different ways, and serves different purposes. What I value most in music and art, and what I aspire to, is honesty. If an artist is saying something because they have to say it that’s worth something. It’s much more important than genre.

3. What’s the starting point for a composition?
Well, I read a lot of fiction, and many of my pieces are inspired by my reading, sometimes in terms of a general atmosphere, and sometimes in a more detailed programmatic way. Many people have said my music is quite cinematic, and I wouldn’t argue with that (I love movies!) I spend a lot of time shaping melodies when I’m writing, that’s something I feel I’m pretty good at. A good example would be “By Tapering Torchlight” that I wrote for my trio Busnoys, inspired by a passage from Simon Armitage’s beautiful translation of Gawain And The Green Knight. I later found out that the one sort of music he doesn’t like is jazz, so it might horrify him!

4. Who are the most inspiring people you’ve collaborated with so far, and why?
There are so many, but working with my friend and fellow percussionist Simon Allen has certainly been one of the most important. His attention  to Sonic detail is beyond anything else I’ve experienced. I worked with Simon in a band called Dangerous Kitchen, where we were joined by one of my heroes Stan Sulzmann on saxophone. It was a free improv group , and Stan’s ability to contour exquisite melody out of thin air would regularly leave me open mouthed.

Much of my life , and the area where I earn most of my bread and butter, is spent working with contemporary dance. Choreographer Sheron Wray has always been hugely inspiring to work with, a constant source of creative thought.

I have a longstanding collaboration with Silent Film pianist Stephen Horne. We perform regularly in the UK and Europe.

And finally visual artist Maria Hayes. We’ve worked together for years. Most recently she’s made some wonderful video art to go with tracks from my solo album “Behind The Mist”.

5. What (if any) superstitions or rituals do you have? (around performance, recording, everyday life?)
None really!

6. Where do you stand on the streaming/downloading/file-sharing/musicians-not-getting-paid-for-their-music debates?
I think people should pay for recorded music basically.  It’s a way of showing real support for musicians for less than the cost of a round of drinks. I do fear the “music is free” genie is well and truly out of the bottle. I’ll keep trying to get it back inside though!

7. What’s next? (musically, geographically, recording, tours, ensembles, anything…)
I’ve got two new duos with pianists – Stephen Grew, and Alex Maguire. An album with Stephen should be available before too long. I’ve also got a new improv trio, Kepler Orbit, with Tom Ward on bass clarinet and Ed Riches on guitar, where we’re using a lot of electronics. Again we’ve been recording recently.

I’ve been writing songs in collaboration with jazz singer Laura Zakian, and she’s going to be performing some of them shortly in London with pianist Steve Lodder. And finally I’ve been working with choreographer Zamira Kate Mummery on a new work dealing with dyslexia. One thought on “7 Questions for… Martin Pyne”