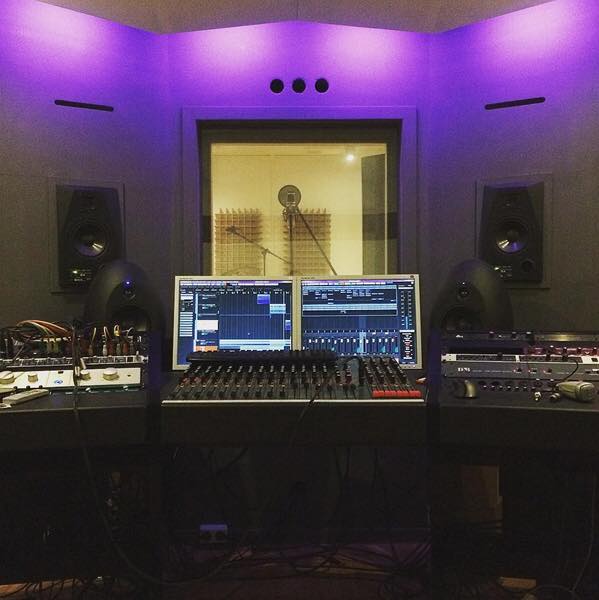 White Noise Studio (including owner Marlon Wolterink) began to seep into my awareness from the beginning of 2017 with mastering credits on albums that are fast becoming favourites, such as “Supreme” by Orthodox and “Molar Wrench” by Dead Neanderthals and Sly and the Family Drone. Then there’s Marlon’s drums-guitar duo project, Meglamancha, described in these pages as, “offering up a dystopian future of experimental music, filtered through an asymmetrical machine-mind sensibility.” (Make of that what you will!) So, a drummer and studio wizard with a fondness for noise? Let’s see…

1. What was your first musical instrument, and what did it mean to you?
I started out playing the drums when I was seven years old. Meant the world to me, getting really fanatical during my teens and early twenties. After a while I also started playing bass guitar and writing music. That’s when the whole recording / mixing thingy also started happening. 2. What was the first music you ever bought, and the most recent?
The first record I ever bought was the tape version of Sepultura’s album Arise. Bought that album with some holiday money my parents gave me during vacation. After that I bought Earache’s Grindcrusher and it went downhill from there During the end of the 90s and until halfway through the 00s I was really into checking out albums in the record store and buying them. After I got into recording and with the rise of YouTube and stream sites I started buying less albums. Since I set up the studio I also started to receive more albums from people and now occasionally buy or order on Bandcamp.

I love to receive a copy of the tracks and albums I mix. The last album I bought therefore was an album I didn’t receive but wanted to have a physical copy of.

3. You run White Noise Studio but you’re also a musician – how does your approach to music differ depending on these roles?
Well the approach is pretty much the same in that the exact approach is different every time. Doesn’t matter if I’m recording, mixing or playing. What’s the same every time is that the song or track always has to be cool as a whole.

So if I play, I’ll adjust my playing to improve and fit the song. That can be really be about playing in the pocket and being sparse with drum fills or just do something completely over the top and taking a lead role. In recording or mixing it’s always about making sure every part of a track works with the others. How I approach this depends on the song or track. I can mix, make sure every part fits with each other and that’s it.

Or I can get really hands on and add parts, do heavy editing, delete unnecessary parts and change arrangements. It’s all about what’s needed and what’s exactly wanted from me.

4. Who are the most inspiring people you’ve worked with so far, and why?
To be honest, almost everyone I work with inspires me in one way or another.

For example if I set out to mix in a certain way but the artist points out a different point of view. That’s something I find very refreshing and an eye opener. You learn something from every session.

Anyway, pretty much every band I have at my White Noise Sessions. Of course I have to name Dead Neanderthals, the first band I recorded at White Noise Studio and I’m very happy to have worked with them over the years. Their unconventional approach to everything, whether as a group or in their solo work, always inspires me to rethink my workflow and mix choices. This strengthens me.

My mate Freek Phillipi I have to mention too. Whether it’s because of all the mixes we bounce off of each other or the way we create music as Meglamancha, it’s inspiring.

5. What is the oddest/least conventional sound you’ve incorporated into a recording so far (either your own or someone else’s)?
Doesn’t happen that much actually, or I don’t find many sounds unconventional or odd.

I remember I once had a sampler crashing on me and it blurped out all the samples in a weird transformed total random order. I was able to record it and in the end used it for an intro of a song. I tend to use my recording room a lot as a sort of room / reverb type of effect in mixing.

Recently, I ran a track for mastering through an bass amp and guitar cabinet into the room to add a sense of space in the master. A few microphones were placed behind 2 bass drums placed in the room. The resonances of the skins along with the sound bouncing off the walls were then recorded again and blended in with the original track. Worked really well!

6. Where do you stand on the streaming/downloading/file-sharing/musicians-not-getting-paid-for-their-music debate?
Well that’s a difficult one to answer. I’ll probably have a different opinion on this next week.

If you support a band: buy their stuff.

Regarding streaming and payment from streaming: the payment per stream is really low. That monthly subscription needs to account for all plays, yours and the other artists. If you sell an album it’s a one-time payment and infinite listens for the buyer. With streaming the payment is per play although it’s way too low. Hard to put a number on that. So an idea is to use streaming for promotion and link to a site like Bandcamp or iTunes where you can sell an entire album. Or just only use Bandcamp or iTunes for selling your work and no streaming.

Filesharing, I dunno. Purely in regard to music: it probably exposes your music to more people and real fans support and buy the music anyway.

But downloading music is lesser big of an issue these days with stream sites as Spotify and YouTube in play. Personally, I like stream sites as a user, I check out more music these days than ever before. Also, I use Spotify a lot for reference in mixes.

7. If money and time were no object, what would your next project be (either as a musician or as a ‘recordist’)?
Well pretty much Meglamancha. Time and money is not a factor with the project since Freek Philippi and I are able to do everything ourselves. And here are some White Noise Sessions, including aJN favourites Killerkume…

One thought on “7 Questions for… Marlon Wolterink”