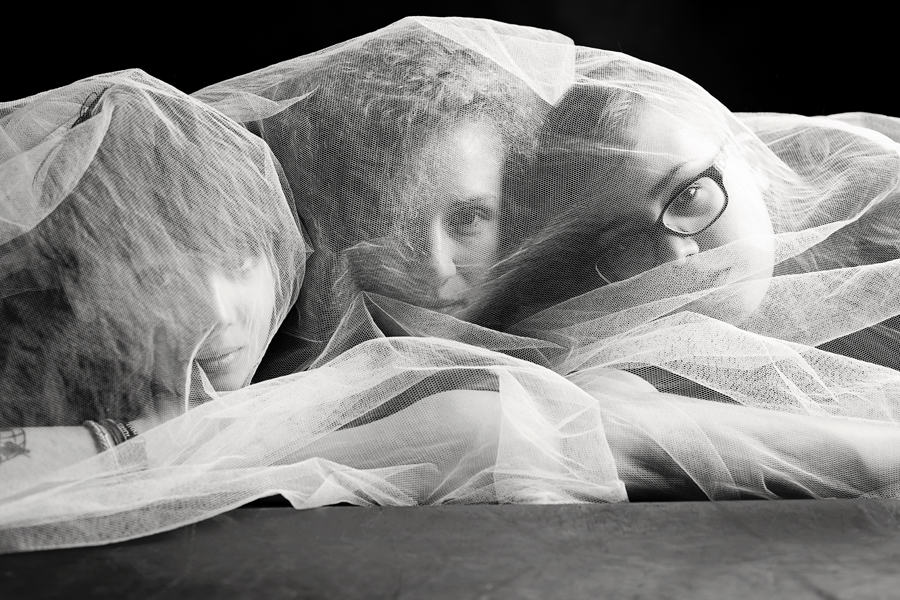 Who or what is J Frisco? Experimental jazz trio? Genre/gender-fluid sonic revolutionaries? Purveyors of bloody interesting music? Why are they even called “J Frisco”? That last question they’ve answered, at least…

“We originally used to be called John Frisco, this was a fictional character that we made up, he had an entire life story and it was a reaction to the heavily male-dominated music/jazz scene. We kept ourselves completely anonymous when we first started the band, the idea being that people would believe that a man named John Frisco would turn up and play some music on his laptop and then we would rock up and do our thing.

This worked for a while until the mystery started to disappear the more live gigs we played and people also wanted to come and watch us for us. After a while we realised that John was a mask and something we were effectively hiding behind and that actually we could be ourselves so we got rid of the ‘ohn and were left with J Frisco. We still channel our inner John and if we can’t ever make a band decision we ask ourselves, what would John do, haha! Now we feel the name sounds like the band and we like that nobody quite knows where it comes from which is a bit like how people describe our music!! The funniest part is that of all the gigs we’ve now done, I don’t think we’ve ever not met a John whilst there, whether it’s our taxi driver, the sound engineer, the promoter, etc., etc. there’s always a John at every gig!”

J Frisco is Jemma Freese (keys), Lara Jones (saxophones) & Megan Roe (who should think seriously about changing her last name to rhyme with ‘guitar’). Who or what is J Frisco? Read on…

1. What was your first musical instrument, and what did it mean to you?

JEMMA: My first musical instrument was a cornet, but I found it really hard to play and at the time I thought it was a really uncool instrument, but the school were giving free lessons and I wanted to get out of class.

I actually wouldn’t have picked guitar, my parents got me one for Christmas when I was 7. I thought flutes and violins were much cooler. Thank you Mum and Dad for making the executive decision.

It meant a lot to me because it was a great way for me to show off and get attention.

LARA: My first instrument was piano, I was really lucky we had an acoustic piano in my house that I think my grandparents gave us. I remember pleading with my mum to let me play, my brother was learning and I’d heard him and was so desperate to learn too, but I was so small I couldn’t even reach the keys when I sat at the stool… eventually when I was 5 I started lessons (thanks ma, you rock) and there’s something about the piano that no other instrument gives me, in sound, emotion or composition… maybe because it was my first? And first loves always stays with us somehow it seems…

2. What’s your ‘guilty’ listening pleasure? (i.e. something you listen to in secret?)

JEMMA: My guilty pleasure – I don’t listen to anything in secret but I think people would be surprised to know that I like listening to pop chart music and analysing it.

MEGS: I’m not guilty about anything I listen to. All music is equal. But, probs the most embarrassing is Trisha Paytas. Her EP ‘Chicken Fingers and Lipo’ speaks to my soul.

I’ll listen to anything from Bach to Backstreet Boys. It’s dependant on situation and how I’m feeling.

3. What have been the best and worst moments playing live? MEGS: The best and worst moment was playing at the Wardrobe for my final 3rd year exam in a noise band called Pillar Digits.

I was rocking and sweating so hard that my glasses fell off into the audience. I am very badly short-sighted so couldn’t see a thing.

Thankfully, my Mum climbed to the front and gave me them back. Thanks, Mum.

LARA: Mmm, that’s a hard one because I get different things from different performances and I try not to let ego get in the way of what feels like a good performance. I suppose the best moment is any gig where I feel I can completely lose myself, I genuinely believe I am only alive for those moments when my eyes are closed and I have no idea what I’m playing, it’s just happening, and it’s the highest of highs and the most alive I can feel, I get that a lot when I play with the Friscos. Does that sound pretentious? It’s hard to word these things sometimes.

The worst is either gigs where nobody is there, I find it incredibly hard to play without an audience, or the time when my battery pack died on the final song at Lancaster Jazz when I was playing with my band Beyond Albedo… that’ll teach me to buy the cheap batteries hah!

4. What are your non-musical influences?

JEMMA: My non-musical influences are my 15-year-old niece, who is the most clever and mature person ever, David Lynch, whose style I really really like as I love dark and twisted stories, and A J North who has been through so much yet has come out of it in such a positive way.

LARA: People mostly… People and their stories are fascinating. Dance, books and the moon.

5. Does humour belong in music? (With thanks/apologies to Frank Zappa for  this question!)

JEMMA: Humour in music – HELL YES! Me and Megs used to be in a band called Tales at Sea which was a pirate-themed blues rock band which was extremely fun and I had so much fun being my character – Jolly John – in the band. It depends on why you are making the music, Tales at Sea was for fun, whereas J Frisco is more than that – music is made from different emotions.

MEGS: It absolutely does. Some of my favourite songs were written by Eric Idle (Monty Python). Comedy is as much as on art form as music.

LARA: It absolutely does! I think in performance humour can be a beautiful thing too… Really all emotions belong in music but I think I’m too sad and slow to be humorous, I really struggle to create anything that’s not sad. The other Friscos have been teaching me about humour though, they are both hilarious in such wonderful ways. They can create really humorous music when they jam together, it’s amazing to witness!

JEMMA: In terms of streaming, I actually don’t know what I think about it. Mainly because I have just accepted it. The internet is a massive organism and is bound to affect everything it comes into contact with. I don’t love or hate it.

MEGS: Tbh, there is nothing we can do about the way the industry is shifting. Yes, I would love to make money from our releases but, I understand the industry’s need to evolve. We just need to come up with more creative ways of making money, I’m happy to do that.

P.S. pls buy our album on Bandcamp so I can make it through Christmas xx

LARA: Ahhh it’s a difficult one really isn’t it. It’s something I’d struggle to answer in a few sentences. I mean of course musicians should get paid and it’s so sad that certain platforms exploit musicians. It’s hard to reject streaming though, you can try make a stand and only allow your fans to buy it but how can you control who shares it once it’s downloaded and ultimately we all want our music heard and don’t want to stop people from hearing it that can’t afford it. It’s the constant struggle of doing it because we love it but also needing a payback for all the blood, sweat and tears that go into it. It’s the same with fees at live gigs I suppose.

I love that we have such easy access to music now, I think it’s so wonderful that one minute you can be listening to one thing and the next another, but also a part of me would have loved to live in an era where you saved money for your one vinyl and that’s all you could afford to listen to for a long time, and you’d listen over and over again and you’d know every detail of the album artwork etc… but also maybe I wouldn’t. Who knows? JEMMA: What’s next for us is album 2 and a motherfuckin’ mercury prize, mate.

LARA: So we might as well tell you.. album two is being recorded in January with a  release in 2019! I’m really hoping 2019 will be when we can start exploring gigging beyond the UK too. 6 thoughts on “7 Questions for… J Frisco”