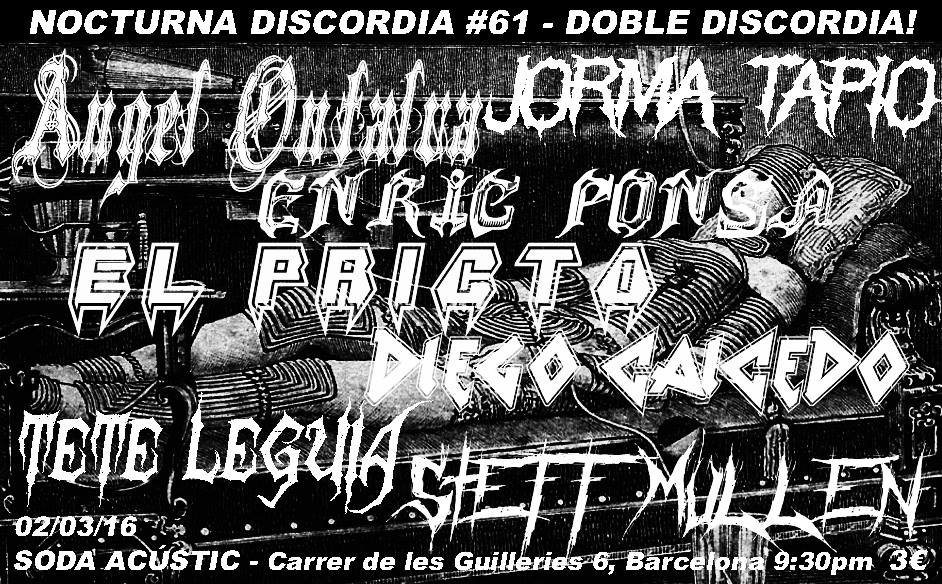 If I had to order my CD collection by geographical origin, Spain and Finland would probably top the chart. You can imagine that I wasn’t about to miss a session of Iberian-Finnish improv…

The first impression is that Tapio has a lovely robust flute sound: sweeping, thick, and breath-heavy, it drives a certain Eastern-ish mood – conjuring temple images alongside Ontalva’s overdriven guitar which brings a random fluidity to the mix. And Ponsa’s drums? The mallets rumble across the skins, interspersed with gong-like cymbal crashes. It’s a strong combination, sonically interesting, the different timbres overlapping, finding level and place. As the three circle and spiral, Ontalva throws out bursts of abstract distortion with a little judicious tapping; Ponsa graduates to a sharper more brittle attack; the intensity of Tapio’s flute sound seems to swell; then Ontalva reaches for the EBow, producing that trademark endless sustain.

It’s abstract, transportative, a kind of high-volume meditation – strangely peaceful despite the volume.

A change of mood comes with Tapio’s switch to tenor saxophone. It’s a very strong tone, muscular but supple. I’m not going to suggest a direct parallel, but the next few minutes made me want to listen again to some of Coltrane’s later Impulse! works.

Ponsa sets up a lurching stop-start rhythm. Ontalva drapes angular phrases over it. Tapio begins a quest. From upper to lower registers, searching for the exact phrase or note to express the moment. It’s loud, there’s no shortage of testosterone, and yet, this second improvisation retains a spiritual quality from the first.
Muffled drums, metal bars inserted between guitar strings, two more varieties of flute… there’s no shortage of experimentation as the common creative ground is discovered and explored. Yet, despite the absence of any composition, the hallmark seems to be a constant, natural melodicism.

Leguía’s Vox bass is played mostly lap-style, allowing easy preparation and manipulation of strings and pickups, metal rods are thrust through magnetic fields, creating odd noises. Caicedo employs his usual box of assorted sound manipulators to elicit a complementary set of audio quirks. Pricto’s alto is beautifully harsh and ugly. Steff Müllen (who looks suspiciously like a certain Enric Ponsa with hat and fake moustache) seems to apply fresh energy to the sagging drums.
At one point, there’s a commotion at the bar (sounds like a blender and someone hammering a metal lampshade) which adds to the chaos. It turns out, some regulars at Soda don’t ‘get’ these Wednesday night performances and so El Pricto invited them to join in – make a sound, be a part of the noise, understand it better. As a stage-bar call-and-response situation raggedly emerges, whether their understanding has improved isn’t clear, but their enjoyment? Certainly.

As with the earlier set, there’s a bizarrely soothing effect to be had from volume and discordancy – it really shouldn’t be restful but somehow it is – a kind of release to be had from relaxing and letting the noise wash over you…

Another snapshot: Leguía and Caicedo join again in a kind of anti-idiomatic passage, all jagged corners and angles. Müllen/Ponsa’s drums are an ocean, the tide of volume and stridency ebbing and flowing but also pushing and pulling at the sound. Pricto slices his breath into pieces, little auditory shards providing a commentary in an unheard language.

Heavy: from free jazz and rock on the one hand, and avant-garde experimentalism on the other, it was a particularly discordant night.