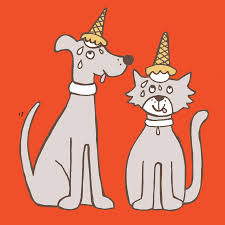 Some Some Unicorn is improvisation on a grand scale, a community-at-a-distance of 30+ musicians, is self-described as “big band free drone”, and stems from a contemplation of the difference between composition and improvisation. Sounds pretty good so far.

In the words of SSU mastermind (ringmaster? guru? chief unicorn?) Shaun Blezard, “Are you a composer if you improvise?” He decided to cut that particular Gordian knot by composing an album using improvisations by various artists (for the full list see post on the SSU website under the heading “Members”).

Back to Shaun, “I recorded a couple of hours worth of improvisational ‘sketches’ on an iPad which were uploaded to the cloud and an open call went out for others to work with the material, playing along or playing with it. This completed part one, twelve tracks of dense work that was put out again for ‘overdubs’. When I got the second versions back the hard work began of getting an album that was coherent and still featured everyone.”

In other words, this may be a ‘big band’ but each contributor is creating in at least semi-isolation.

The music is haunting, occasionally disturbing, often transcendent, even blissful…

…the pointillistic piano intro of Memories In A Frame, leading into a rather eerie constantly shifting soundscape that contains hints of Blade Runner… the abstract ambience and noise of The Problem With Contempt, hinting at classical and jazz flavours… the poetry of The Dawning Of Chimes (including the “some some unicorn” reference)… the moans and distant doom guitars of A Haunting Song Of Thirst… the electronic glitches and squirts of Putting An End To All… and is that a harpsichord freely improvising on Inventing New Hope?

The sounds oscillate (sometimes literally) between noise, tuneful fragments, delicate melodies, questing ambience, social commentary, and so on but the whole thing hangs together as a single and coherent aural journey, practically cinematic, a tribute to large-scale creativity and the editing skills of Mr Blezard.

Some Some Unicorn have recently played a few gigs in the UK, featuring Shaun plus a revolving cadre of improvisers, depending on availability as much as anything. Recent online hints suggest more live gigs are in the offing, including a foreign jaunt – stay tuned, I sense they’re not to be missed… Finally, for the really ambient version, some of Shaun’s original ‘sketches’ have been released as “Some Solo Unicorn”…

One thought on “Some Some Unicorn and The Golden Periphery”