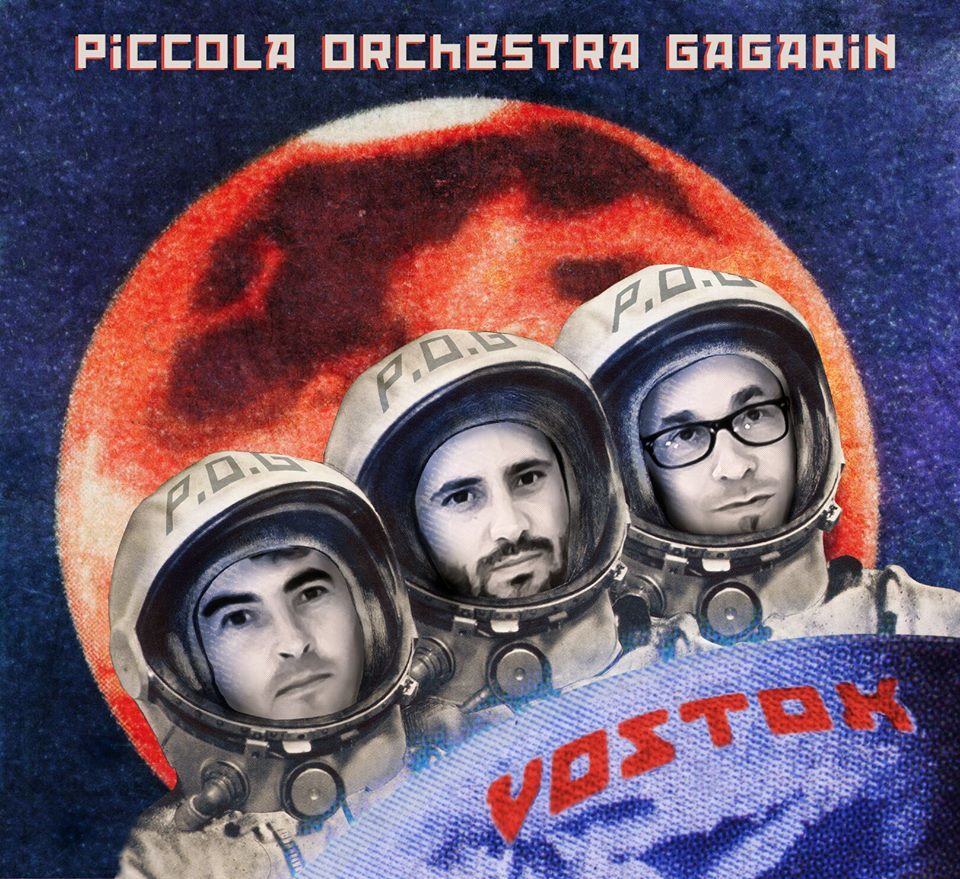 In 2013 I bought a CD (Marcel·lí Bayer’s “Les Narrations”, in case you’re interested) and with it came a free sampler disc, “Jazz from Catalonia 2012”. New to town, it was a good introduction to the variety of jazz and improvisation in Barcelona and one of the stand-out tracks was Piccola Orchestra Gagarin’s Corsicanskaya.

Now, here we are in 2016, and POG have a new disc available, “Vostok”, named after Yuri Gagarin’s planet-leaving craft from April 1961. The previous disc, “Platos Combinados” was a live recording, capturing POG’s quirky, charming, wry, folk- jazz explorations, and “Vostok” continues the same journey; if anything, travelling further afield.

This is a highly compelling album. There are multiple modes of entry – African rhythms, re-worked traditional songs, almost-classical grandeur, free noise, etc. – and you’re bound to be sucked in by at least one of them. Once inside, the kaleidoscopic, ever-transforming musical vista will keep you there as one facet leaps smoothly to the next. Not to mention Agranov’s agile and entrancing cello, Roca’s deceptive anti-rhythms and ear for detail, and Angeli’s chameleonic stringed grace. And yet, despite the broad variety of flavours, it all forms a completely natural whole.

The space and cosmonauts theme is established from the off, but with a difference. Mandla Maseko is or will likely be the first black African in space (excuse the uncertainty – Google?!) and so the disc starts with POG branching out into some African percussion rhythms. Other highlights include Krutitsa vertitsa shar goluboy which is more familiar POG territory, a take on a traditional Russian song of unrequited love sung by Agranov (after just one listen, I found myself humming the chorus refrain in the shower, which hopefully is a good thing…)

The counterpart to Krutitsa… is Piaghesa, a traditional Sardinian song with Angeli on vocals. Both songs offer that folk-y mix of wistful hope and melancholy but filtered through a willingness to experiment and explore. Between them bookend the group’s roots nicely. But wait, what about the third member of the triumvirate? Roca’s Catalan upbringing is represented by a couple of canços of which the lullaby Canço de bressol is particularly affecting with its stately, soothing, semi-classical vibe.

Meanwhile, Dum Kalthoum conjures the air of a souk  – hot, dusty, raw spices – with the angular drumbeats pushing all three in unexpected directions. Crater Malaria is pure free-form fun. And returning to space, Himne follows a BBC-ish announcement of Gagarin’s death with a powerful, sombre-yet-celebratory funeral march (and the homages to fallen cosmonauts continue with Laika come home).

We close with a dose of POG humour, as Duck and cover draws inspiration from a 1951 US civil defense film, advising children what to do, “when an atomic bomb explodes.” The upbeat, cheery music, complete with quirky bells, shakers and squeaky toys, is the perfect commentary on the straight-faced commentary that informs us that an atomic bomb may knock down signboard and, “break windows all over town.”

“Vostok” is fearless Mediterranean fusion (Agranov may have been born in St Petersburg but the family moved to Israel soon after) with a Cold War space exploration theme and an absence of unnecessary formalism. Sounds good to me… and it sounds better with each listen.

(Piccola Orchestra Gagarin can be found – and followed – on Facebook.)