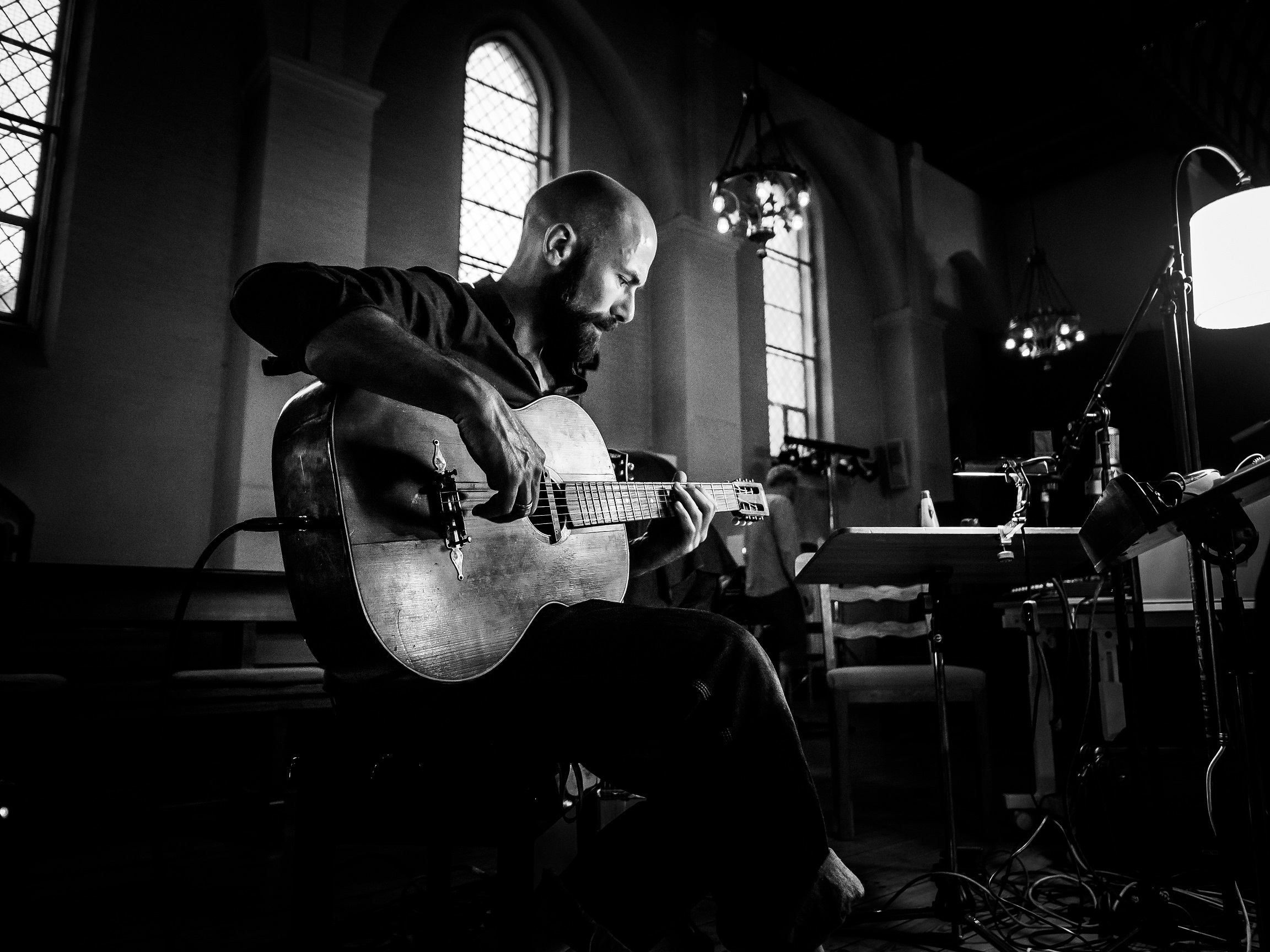 I have to thank the forces of ‘jazz conservatism’ for introducing me to the work of Mark Solborg. The UK’s Jazz Journal covers the full breadth of the genre but it’s fair to say there’s a focus on more ‘traditional’ expression. So, as a reviewer for JJ, I get my hands on the more outré, less structured, and (to me) more interesting recordings. That includes a number of Mark Solborg releases: the exploratory free nonet, “4+4+1“, the “Song” duo interpreting (semi-)standards with Anders Banke, the subtlety of the Maniscalco-Bigoni-Solborg trio, and most recently, the freely improvised “Tuesday Prayers” with Herb Robertson. So, that’s what got me to this point. Mark’s answers to his 7 Questions offer numerous departure points for the next stage of the journey – I recommend you take one…

1. Name an experience that contributed to your becoming a musician?

…my musical references and upbringing are (luckily ?) sort of messy. Hard to narrow it down.

My mother is Argentinian and my father Danish, so I grew up with a weird variety of language, sound and music experiences that had impact. Also the very left-wing neighbourhood and beautiful, engaged, enthusiastic people is something I remember very clearly. Lots of concerts and singing by both kids and grown-ups – together. Frequent visits to the Danish Art Center, Louisiana and other museums mainly for visual art also a had major impact, I realize.

– Left-wing songs around numerous camp-fires, accompanied by guitar and maybe accordion. Lots of The Beatles.

– My parents would take me to all kinds of concerts: The Berlin Symphony and a huge variety of classical music, Chick Corea/Herbie Hancock Duo, Danish folk singers (Benny Andersen and Poul Dissing), Argentinian Mercedes Sosa, Pat Metheny, Keith Jarrett and many, many others.

A few records from my parents collection:

…it makes me smile thinking of these.

At the local music-school, after school classes, high school and especially at The Rhythmic Conservatory, Copenhagen and in NYC I was very fortunate to meet a handful of extremely dedicated teachers and musicians. I am truly grateful for their generosity beyond the call of duty.

At age 14, I chose to attend Mellerup Efterskole – a special Danish type of “boarding” school focusing on music. Nothing like the classic British version of boarding school. Free access to rehearsal spaces, theory, main instrument teacher, mandatory choir, ensemble, etc. alongside the classic secondary school curriculum. In many ways I was blown away – and got deeply engaged. We played and sang all kinds of music including a bunch of first attempts at “home-brew”.

Becoming a musician as a profession is something that slowly grows on you. At least on me. I never seriously stopped to think about whether to play or not. I just played, practised and listened.

Whenever it was particularly fun and/or interesting I’d try to make it happen again, write it down, develop it , record it, etc. I think no matter how things could have evolved I would always have ended up constructing and creating things in one way or another. It fills me up.

2. Music-wise, who or what are you listening to at the moment?

These days I am doing a lot of research into Spatial Music. Music made for specific locations, maybe with a geographical concept involved.

Guitarwise, alternative and instrument idiomatic approaches interest me a lot. The sound, the courage to lose the effects, acoustic playing, use of fingers, how to add a vocal quality to the phrasing, use of mechanical devices, etc.

…and then there was Neil Young and Promise of the Real for three solid hours at Roskilde Festival 2016. Monumental!

3. What’s the balance of preparation vs. improvisation for the average live set or recording?

Hmm.. ..the combination of composition and improv has always been central in my work.

For some groups, e.g. with Evan Parker or Herb Robertson it’s all improv. For that I practise to get as closely connected to my instrument as possible.

Technically, ear-wise, dynamically and otherwise. Maybe I’ll practise Monk tunes (or other melodic material to my liking), Leo Brouwer or technical exercises I find relevant… from there on it’s all about staying open and present in the moment. I consider myself and everybody involved as tools and media for beautiful and strong music to happen. For other ensembles with written material I practise parts intensely. Also stuff that I am not playing – but need to know.

The ambition is to get as acquainted with the material as possible – so that I can play around with it, communicate with all players, phrase it, demolish it, shut my brain down and still know my way around it… it (and I) can always get better, and usually I find that only after, say, 4-5 performances the group really “owns” the music. It’s all very basic – but true.

The aim for me is personal music where the sum of the collective efforts is greater than the individual performance. I find the more onanistic sides of music very boring.

Not preparing doesn’t make sense to me – at all. Preparing differently for different kinds of music and musical approaches and being in contact with your instrument is essential. It’s not about control but about presence and ability to grab and execute ideas of the moment. I try to stay positive and in shape.

4. Who is the most inspiring person you’ve collaborated with, and why?

But Evan Parker somehow takes the prize. In a magical way he always knows exactly where to place himself in the music and contributes with exactly the right thing at any particular moment… and always sound just like… Evan Parker. It is truly inspiring. Working with Parker is always the greatest recognition I could wish for.

…and then there are my students. More often than not I return from a session or class inspired and with a need to investigate something new.

5. What superstitions or rituals do you have? (around performance, recording, everyday life?)

…some of it is already described in answer no. 3. Practice and getting in touch with myself and the guitar is essential.

The last few years I have been running every 2 days no matter where I was. That helps me, also in dealing with disappointments and working-pressure. Walking is also good. Always makes for a higher quality of thought (and conversation). Mental and physical hygiene makes everything easier or, say, lighter.

The last 15 years I have developed a praxis that involves writing, practising, performing, improvising, recording, mixing, mastering, wrapping and releasing the music I make and take part in. It’s sort of a circular movement involving a multitude of processes. I try to keep it evolving. Albums no. 19 – 21 are in the pipeline. One of them with a video add-on. Really looking forward.

Tough one. On one side it seems so right not to move all that plastic, metal and paper around with pollution and other waste of resources as a result. But – I like the touch of paper and graphic artwork, I like vinyls and I love the analog (..and/or very high resolution) sound. Big dilemma – and still slightly undecided. These days I like the thought of our music being available as both streaming AND the high resolution vinyl with artwork for the ones (the few..) that (like me) enjoy that.

I keep a close eye on the development of music-carrying media – it’s moving really fast, and I think good solutions preserving the artistic integrity will emerge from all this.

Regarding not getting paid I am just offended and appalled. Professional musicians and composers need to be paid professionally. Otherwise they can’t spend their entire working-life on producing and developing music of the highest possible quality. I find it really sad when I encounter players of a rare international super-high level that have to have a “day-job” instead of spending all their time doing what they do best. It’s not about generating wealth, fortune or fancy cars. Just about a decent living for people who do great work that is enjoyed by many – and even more as streaming blossoms all over.

7. If money and time were no object, what would your next project be?

A larger research project into Spatial Music, involving composed music and improv-concepts for a variety of ensembles. From solo guitar to symphony-orchestra (a sinfonietta could suffice :)…

But with TIME to really get in depth with things. My musical life is filled with great music, great players, many really interesting projects and proposals. But time for developing content, unfolding visions and the great potential of groups and projects is under heavy pressure. Not only for me – but for a lot of my peers. Some of the reasons have to do with the above question.

Practical solutions take good and efficient tools. Often fueled by great playing and spontaneity. Fine – sometimes even wonderful. But – developing great and lasting music to remember takes TIME on a daily basis. I would like more. A more consistent working base to unfold things in my head and ears.

…working on that – every day.

And just dipping into my own starting points for Mark’s recorded output, the following (and much more) are available from ILK Music: One thought on “7 Questions for… Mark Solborg”