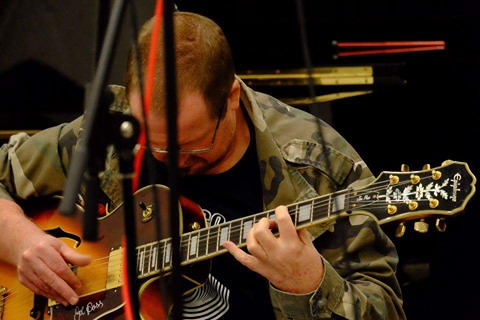 Improvising guitarist, sound manipulator, relentless experimenter, fiddler with electronics… Ian Simpson is hard to label and that’s exactly as it should be. My own point of entry to Ian’s work was via his involvement with Some Some Unicorn (possibly the most ambitious improvising ensemble in the UK right now – discuss…) but his involvement in improvised music goes far deeper. In his own words…

2. What was the first, and most recent music you bought?
The first music I bought (with my own money) was by the Beatles. It was the album ‘Help’. I absolutely adored it and played it over and over again. I had a record player that only worked on batteries so as they ran down the tracks got slower but I still listened until I could persuade my parents to buy more (I would have been about 10 years old at the time). The last CD I bought was Together as One by Dinosaur (Laura Jurd’s band). I came across it quite by chance on YouTube. There are some fabulous young jazz composers at the moment offering their take on the music. It’s vital this happens to keep the genre alive. A recent example of this was a Gogo Penguins gig at the Ritz in Manchester. They sold it out which would never have happened 10 years ago. The audience covered all ages, the enthusiasm for the music was breathtaking.

3. What’s the balance of preparation vs. improvisation for the average live set or recording?
I virtually never prepare for a guitar performance apart from standard warm up exercises beforehand. I think it’s essential I try to clear my mind in an attempt to leave it open to what the other musicians do. I’ve been described as a deep listener which I would say is what 90% of successful improvising involves. I like to be in the moment and often play with my eyes closed to facilitate this. It’s slightly different when I perform an electronics set. I create some sounds as a basis for the set on a laptop. I transfer these to CD to use during the performance but destroy the CD and delete the files post gig. This way I’m not tempted to use them again!

4. What is the oddest/least conventional sound you’ve incorporated into your music so far?
Many of the sounds I use could be classed as unconventional. My recorded Noise Research material involves field recordings, mains hum, cut up dialogue and audio test equipment (amongst many other sound sources). The material is heavily edited and processed slowly building a piece in the same way the original musique concrète guys did (Pierre Schaeffer for example) but using digital technology. With regards to live work I once used a contact miked tumble dryer filled with metal objects!

5. Who is the most inspiring person you’ve collaborated with, and why?
My most inspiring collaborator has to be Cumbria-based musician / artist Shaun Blezard. I met Shaun many years ago at an Improvised music festival I used to run. We got on from day one but didn’t work together for a couple of years. Our Yeah Yeah Industrial duo is what we’ve been working towards for about 4 years. We have a release out on Box Bedroom Rebels, an independent label based in Manchester run by K. Beard. It’s a 7″ vinyl ep and full length CD limited to 200 copies of Shaun and myself are extremely proud. I’m also part of Shaun’s uber-collective Some Some Unicorn an amazing collection of like-minded artists who perform live across the UK.

I’ve also been lucky enough to perform with Rhys Chatham’s guitar ensembles in 2012 and 2014. The ensemble consists of around 100 guitarists brought together to perform one of Rhys’s compositions. With only 3 days rehearsal, it’s amazing how he manages to bring together such a large group of musicians into one cohesive unit culminating in pretty much flawless performance of the selected piece.

6. Where do you stand on the streaming/downloading/file-sharing/musicians-not-getting-paid-for-their-music debate?
It’s a tough one. I ran a free download net label for years called Electronic Musik. The original idea was to get my own music out there but I ended up releasing other people’s music too. It’s amazing how many people will download until you put a price on it, even a token fee of £1 (as I found on setting up a bandcamp for guitar trio Wire Assembly). We put so much into our work as artists I’ve come to the decision that I don’t want to give it away anymore. What’s already out there will stay but all my future work will be charged for.

7. If money and time were no object, what would your next project be?
If money and time were no object I’d go any study music theory and composition at University as its an aspect of my musicianship that’s always been weak. I’d work towards a PhD and compose in the jazz idiom. Of course there’d be plenty of room for free improvisation within my pieces!

Check out Ian’s work with Wire Assembly, Yeah Yeah Industrial and Some Some Unicorn…