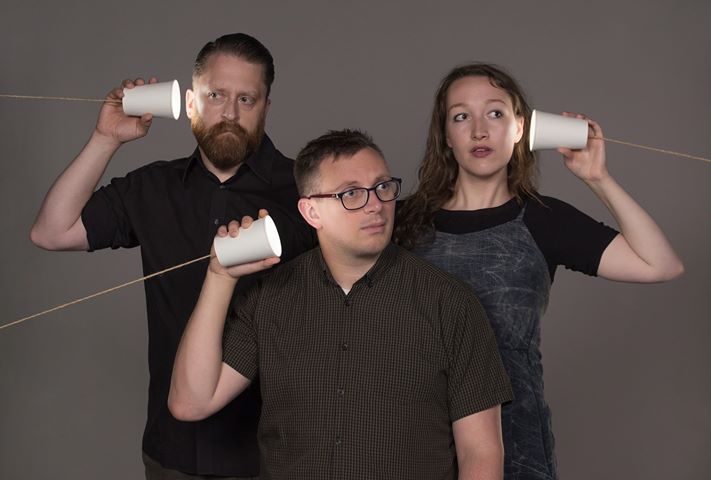 Archipelago tunes are sharp and fresh, treading the fine tightrope line between accessible and ‘ooh-that’s-a-bit-different!’. Beyond the deceptively straightforward surface appeal lie progressive arrangements and non-traditional sounds; and behind it all, a sense of quiet, layered experimentation that in some indefinable way (by me, at least) fits right in with the current British jazz+ scene.

Archipelago are Faye MacCalman, Christian Alderson and John Pope. Saxophonist (and clarinetist, pianist, and mbira-ist) Faye MacCalman takes 7 Questions and makes of them what she will…

1. Name an experience that contributed to your becoming a musician?
I started playing clarinet when I was about 7, and I’m gonna politically jump straight in there and say that that was only possible because of government funding which covered my lessons and instrument rental fees. To be honest that was one of the main reasons I could start playing at a young age, a lot of kids don’t have that opportunity now and it breaks my heart. There are charities and campaigns at work such as the MU, but the government really need to sort it out; music can be classist enough already.

On a lighter note, I realised I wanted to make improvising a part of my playing when a community musician came to my school and spent 3 days teaching us to improvise with an Indian Classical music scale. It made so much sense to me that you could choose your own notes and I’m so grateful to have had that experience.

2. What’s your ‘guilty’ listening pleasure? (i.e. something you listen to in secret?)
I think when I was younger I used to feel guilty about listening to music that didn’t seem to fit with the idea of the musician I thought I should be, but then I realised I had to kinda throw that out the window to be myself and for a few other reasons; to enjoy music, to understand and engage with what it is in music that I do like, and also to not develop that kind of hierarchical view of music that seems to exist. If any piece of music connects with me then I value it for that; so if I want to listen to P!nk or Taylor Swift, I will. If I want to listen to Eric Dolphy or Vi Redd, I do that.

3. What’s the starting point for a composition?
Usually I improvise until I get the sound or idea I’m searching for…Most of time I use the piano to write and experiment with riffs alongside the metronome. I can be a bit chaotic and tend to get stuff done in tiny chunks in any order which might mean whipping out a notebook on the bus or humming into my phone as a I walk somewhere. I sometimes sing short ideas or do a pretty terrible beatbox into my phone recorder to get a rhythm or melody down. Once I have the bare bones I can build it up from there.

4. What’s the one quality you think every musician must have?
Sensitivity! It’s so important to key into the room; your fellow musicians, the audience, the story of the song and also yourself.

5. What or who do you turn to for inspiration when you need it?
Most things inspire me, depending on the day. Words, people, conversations, images and anything that catches my attention or resonates with me. I keep a journal of words, ideas and drawings that I can return to if I’m lost which I find really helpful too; often ideas I’ve written off in the past make more sense at a different time. Joni Mitchell is like a kind of eternal inspiration, and I’m feeling very inspired by Duke Ellington and Tune-Yards right now. Going on a walk and singing into my hairbrush, too, but not at the same time.

6. Where do you stand on the streaming/downloading/file-sharing/musicians-not-getting-paid-for-their-music debate?
On the one hand it is totally unfair that artists are being undermined by huge companies who at the same time advertise themselves as being on the artists’ side, but it has also made vast amounts of music globally available and connected so many audiences and artists who could have never crossed paths before. I also use streaming platforms so I would be a hypocrite to denounce them completely. I think the corporations behind them should be held more accountable, and a middle ground where artists see at least some payback is well overdue. Oh! Hey guess what. Archipelago’s first album is available on there AND Bandcamp.

7. What’s next? (musically, geographically, recording, tours, ensembles, anything…)
We (Archipelago) just released a collection of live recordings from our collaborative project BETWEEN WAVES on Bandcamp in December, and we are writing the new Archipelago album right now to record and release this year. We were really inspired by BETWEEN WAVES to add in extra sounds and instruments like our voices, so I’m excited to see how this album comes out!

We’re also collaborating with J Frisco as a superband off the back of a commission from Lancaster Jazz Festival and will be doing some more with that.