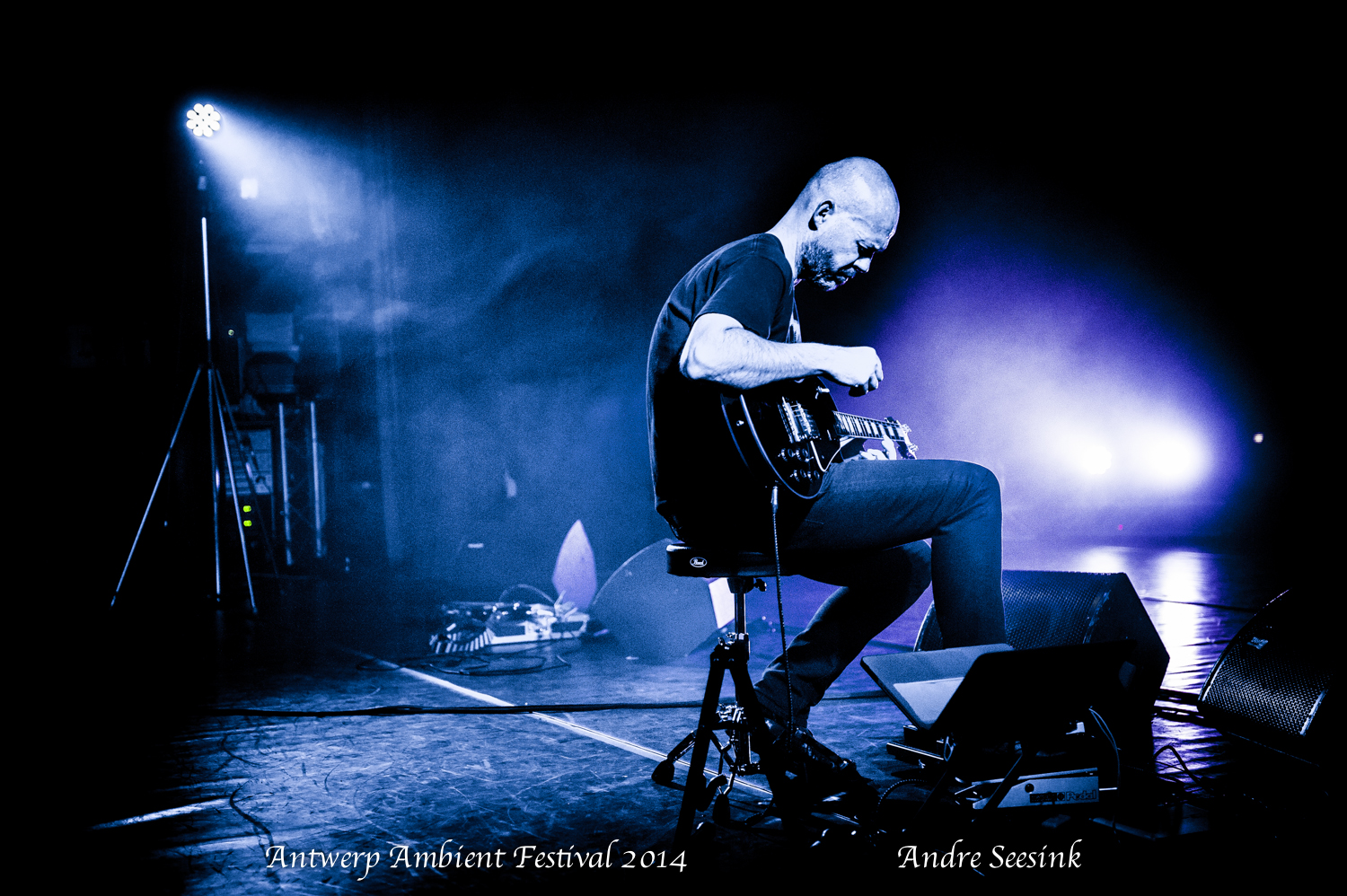 Lucky me. I stumbled across Dirk Serries’ solo “Etched Above the Bow Grip” (Raw Tonk, 2016). It’s an absolute masterclass in deconstructed guitar, in memory of Derek Bailey, which tells you where it’s coming from but not necessarily where it’s going. Then there’s his work with Kodian Trio (with Colin Webster on alto, and Andrew Lisle on drums), and the ambient-noise-drone-improv of YODOK III (with Kristoffer Lo on tuba & flugabone, and Tomas Järmyr on drums). That’s just scratching the surface. In the meantime, Dirk answers the usual seven questions…

1. What was your first musical instrument, and what did it mean to you?
My first real instrument was a KORG MS20 but the first tool I ever used to create sound was a turntable. At the age of 11 or so when I was listening to a lot of Ennio Morricone records, I started to work with lock grooves by accident when one of the records skipped. The skipping triggered my early fascination for repetition, loops and cycling structures. The beginning of it all.

2. What’s your ‘guilty’ listening pleasure? (i.e. something you listen to in secret?)
In secret not really but I guess my appreciation for Neil Diamond and Rod Stewart’s early periods can be considered to be a guilty listening pleasure, right? Just love those sixties and seventies records they both made. The mood, the arrangements and their own unique voice, so distinctive makes me return to their music quite often. And actually they’re two musicians who have been more ridiculed than appreciated for their music, unfortunately.

3. What’s the balance of preparation vs. improvisation for the average live set or recording?
Well, it surely depends with whom I’m playing and/or in which genre/configuration. If I’m playing solo one of my ambient and minimal sets, the set is definitely prepared more although I’m trying to apply more improvisation to my playing techniques as well. Naturally the style and timbre of the music is too fragile to jump into this unprepared so a bit of work is done to make sure the soundsettings are exact and nothing ‘out of place’ can happen that might disturb and ruin the build-up and structure of the music played, whether live or in the studio. When I’m playing an impro set with one or many of my fellow comrades in the impro scene, nothing is actually prepared. I just make sure everything works, from the amplifiers, the guitar to the few pedals and even the cables. But musically all is unknown until we hit the record button or we start our live performance. Lovely experience.

4. Name one person with whom you feel you have a telepathic playing relationship, and why.
Phew, that’s a difficult one as there are more than one, especially in the field of improvised music, but if I really have to choose one, without diminishing my understanding with several others, I think it’s drummer Tomas Järmyr. He was by the way the one who invited me to come over to Norway to play with him and Kristoffer Lo, believing that I had the ability to communicate musically with them and blend our musical worlds. But also because of how he always seems to know to hit exactly the right tone, whether it’s a stroke, a brush, a scratch, a powerdrum or a full-force array of rhythmical or abstract percussion. And at the right moment. Magical. Therefore the experience playing with YODOK III (the trio with Tomas, Kristoffer Lo on tuba and myself) live is so overwhelming, emotionally but also physically. Always breathtaking.

(YODOK III has two new albums out on 14th October 2016 from Tonefloat: a 3 CD studio box set and “The Mountain of Void”, a live performance from the Roadburn festival in 2016).

5. What is the oddest/least conventional sound you’ve incorporated into your music so far?
A long time ago when I was still doing industrial music in the early eighties, I once used my own retching as the main source for one of the pieces. Pretty sick looking back at it now but I think this was the most unconventional I ever went and want to go.

6. Where do you stand on the streaming/downloading/file-sharing/musicians-not-getting-paid-for-their-music debate?
A bit in conflict really. First off I saw the internet rise from nowhere while we were still communicating through the slow surface mail so naturally that became a huge help for us independent musicians, labels and promoters. But the way everything exploded, starting with Myspace to the numerous platforms we know now it’s pretty hard to remain ignorant or stay unaffected. The free download market and its affiliated illegal sites make it very hard for labels and musicians to survive, especially when you count on the sale of a particular strict amount of copies in order to recover the production costs. With the return of vinyl it somehow slowed the process in a way but still it’s amazing to see how fast some of the vinyl releases pop up as an illegal download. Don’t get me wrong, I’ve no objection whatsoever against free downloads as long as they are with the permission of the artist. But when it deprives the artists of their modest income, I can’t really agree with the tactics and the pirate-like style of ripping music and offering it for free on the net. I’m afraid though this is a battle we’ll never win.

7. If money and time were no object, what would your next project be?
Always had a longing to set up my own tentet free jazz and impro big band so if I had the budget I would definitely try to realize that dream. But alas this idea remains in the freezer until a bright day in the future.

One thought on “7 Questions for… Dirk Serries”