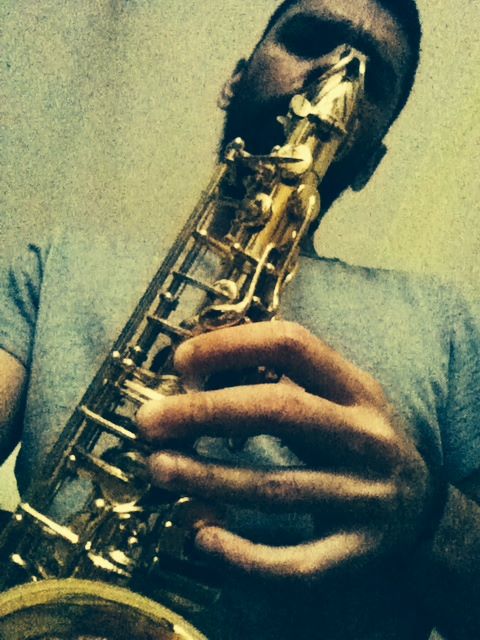 Hailing from Greece, resident in Malaga, Achilles Polychronidis (aka Axilleas Pó aka ‘akipo’ aka…) demonstrates an intense dedication to sound and saxophone. From his earlier work with the Fun With Nuns collective in Thessaloniki to the brutal inventiveness of his Skullfuck duo with Daniel Vega, and the aggressively meditative solo album “Annoy”, the music is disturbing and hypnotic in equal measure.

1. What was your first musical instrument, and what did it mean to you?
The first instrument I got was an acoustic, small-sized guitar I got as a present for Christmas or birthday… can’t remember, now. A really frustrating experience for my adolescence as what I had asked for was an ELECTRIC normal-sized one with an amplifier, so I could learn Kurt Cobain’s moves and stuff. So when “that” came home (accompanied by a brown/mustard-ish learn-how-to-play-those-cheerful-classics hateful book), I remember the feeling of helplessness and mental upset I experienced. Of course, that’s how I got my smash-that-instrument swing in my later days. I really practiced that one hard those days! But I still do have that guitar; pink-sprayed and painted by hand, I used it once in a concert. A real work of art nowadays! Really proud of “her”. I should also mention that I never learned to properly play the guitar, but I sure appropriated some of Kurt’s moves.

2. Who or what are you listening to at the moment?
Right now, at this precise moment of writing this down, I am listening to the New Monuments’ “Long Pig” album, a magnificent work of sound and sweat; and companionship, I guess. But in recent months’ listenings, I have been dancing to the latest hits of people like Robbie Michalchuk, Dead Neanderthals, Dystopian Architect, Martin Escalante, Dancin’ Baby, Kang Tae Hwan, Millions/Sauter, Paul Flaherty, Kawashima Makoto and Lucas Abela amongst many others. I am also into pontic greek bagpipe music, the Jajouka pipes and the male voices in religious rituals in Sufism; but that’s for when I am in the mood for some heavy headbanging.

3. Who is the most inspiring person you’ve collaborated with, and why?
I must say that each & every musician I remember playing with have their own slice of importance in what I have now become as a musician or what I am still to become. The rest, I have forgotten about. Strange thing, the intercourse or relationship between memory, willingness of memory and inspiration. I should also mention that I am very much inspired by those who I haven’t still crossed paths with; the inspiration of the future. Or, that I have also had and frequently keep having some great (sub/un)conscious experiences playing around people I really admire.

4. What have been the best and worst moments playing live?
Playing live does not have best and worst moments for me. I am looking for the trance side of impro/noise. Sometimes I get into it, sometimes I do not. But I still do remember playing the first two Fun With Nuns concerts, back in Greece, surrounded by people I like and by an audience who was too astonished, too snobby or too afraid to attack us.

5. What is the oddest/least conventional sound you’ve incorporated into your music so far?
My voice.

6. Where do you stand on the streaming/downloading/file-sharing/musicians-not-getting-paid-for-their-music debate?
I stand right on top of it. And I believe that fire music & noise musicians should be the new Jay-Zs from now on. They do deserve houses in the Carribbean, free drinks and gourmet dishes after all they’ve been through economically, socially and personally.

7. If money and time were no object, what would your next project be?
To get a house in the Carribbean with free drinks and gourmet dishes. And maybe a sax on which I could play more than ten notes. One thought on “7 Questions for… Achilles Polychronidis”